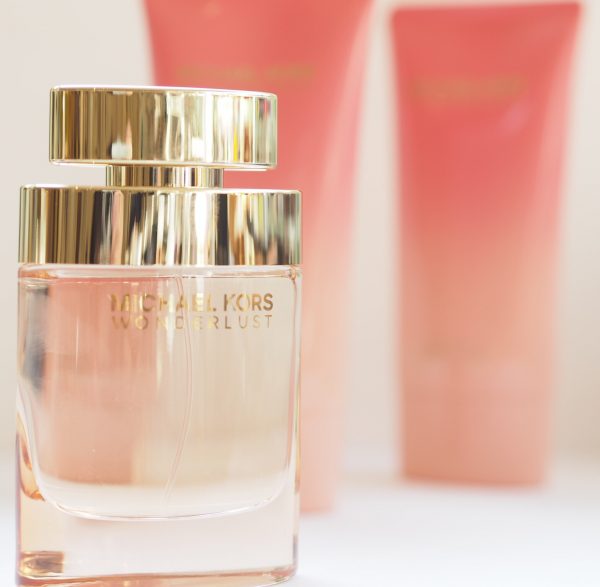 I love Michael Kors – as a family, we’ve been hooked on Project Runway since its inception and Michael Kors was a judge on the show for many series. Zac Posen is his replacement, but it’s not the same without the acerbic tongue of Mr K. Dinner with Michael Kors and Tim Gunn (the real star of that series) would be my idea of absolute heaven. The thing that I’ve learned about Michael Kors (in as much as you can from the TV) is that he says what he thinks – and he undeniably knows what women want to wear. He’s got a very American woman aesthetic which doesn’t always translate, but he just knows, and that’s quite reassuring in a sea of designers that completely forget the real women they’re designing for.

Anyhoo..that’s a rather long winded way to say that there’s a new Michael Kors fragrance that’s just launched. Michael Kors Wonderlust is a big, floral scent that somehow, despite having only mandarin, is also very fruity to my nose. It’s a combination of bergamot, almond milk, jasmine (a lot of that), heliotrope and bergamot with a smooth woody finish. I liked it straight away – it’s an easy wear if you like a fruity-floral but it’s more heady than fresh.

It’s described as an oriental floral gourmand – there’s a smattering of pink pepper, and heliotrope can be rather vanilla-ish – but I think that’s maybe too grand a description. I really don’t get any oriental from it. But, everyone’s nose is different and if you already like the Michael Kors fragrance line, I feel confident that you would also like this – it has a similar thread although different notes and feels consistent within his fragrance range. Michael Kors makes his fragrances through Estee Lauder and I think you can tell – I wish he’d do some more make-up though: I still miss the best ever nude polish he produced way-ago.

The one point is that it isn’t built to last – it doesn’t stay very long so I would recommend buying the 30ml so at least you can keep it in your bag easily and top up during the day. It’s £43 for 30ml, £29 for the Body Wash and £32 for the Body Lotion, but I think I’d bypass the latter. It’s HERE.