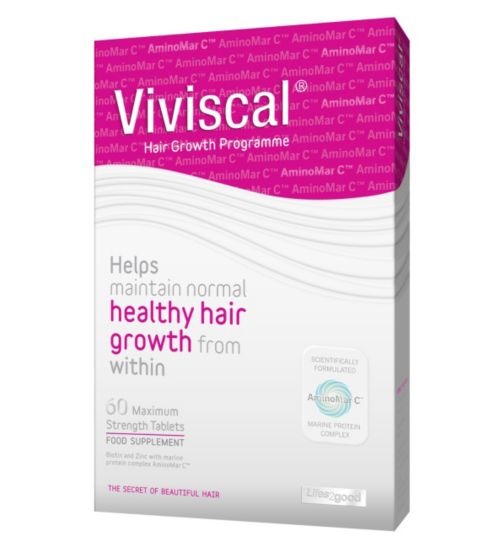 Not only am I still taking Viviscal, but I’ve also got a couple of friends on it, too. I think the main issue with a supplement is that it tends to work slowly over a period of time so that the changes appear seamless and therefore not dramatic. But, although I initially agreed to a six month trial with Viviscal, I’ve taken it to well over a year.

As a recap from previous posts, Viviscal trials showed an increase of 37% in the proliferation of dermal papilla cells (the control centre for hair strands) and Alkaline Phosphotase levels increased by 87% (AP is a molecular message that feeds the dermal papilla). All very well and good but what does it actually look like in hair terms?

I can say that my hair does look thicker – on the rare occasions I add any volume, it’s very noticeable then that it can take volumizing much better. My fringe, which is the bane of my life for parting like a pair of theatre curtains right in the middle is fuller and for some reason, less prone to part. I wouldn’t say that on a day to day basis you would look at my hair and think, ‘how luxuriant and full’! but neither would you say it looks flat and thin. As a happy extra, my nails are stronger. Biotin, Zinc and a marine based complex called AminoMar C which was originally developed in Finland in the 1980s, are all major contributors to both.

Ultimately, hair thinning can be so traumatic that I feel happier taking a supplement to minimize the effects than not. You do have to wait a long time to see the effects and by time you see them you’re already taking them for granted! I think the point is that they give enough of a boost to be useful (in my case) so I don’t see myself stopping any time soon. It’s worth noting that since launching, Viviscal has become the most clinically proven supplement in the UK with 10 published trials.

You can find Viviscal HERE (I notice it’s on offer).