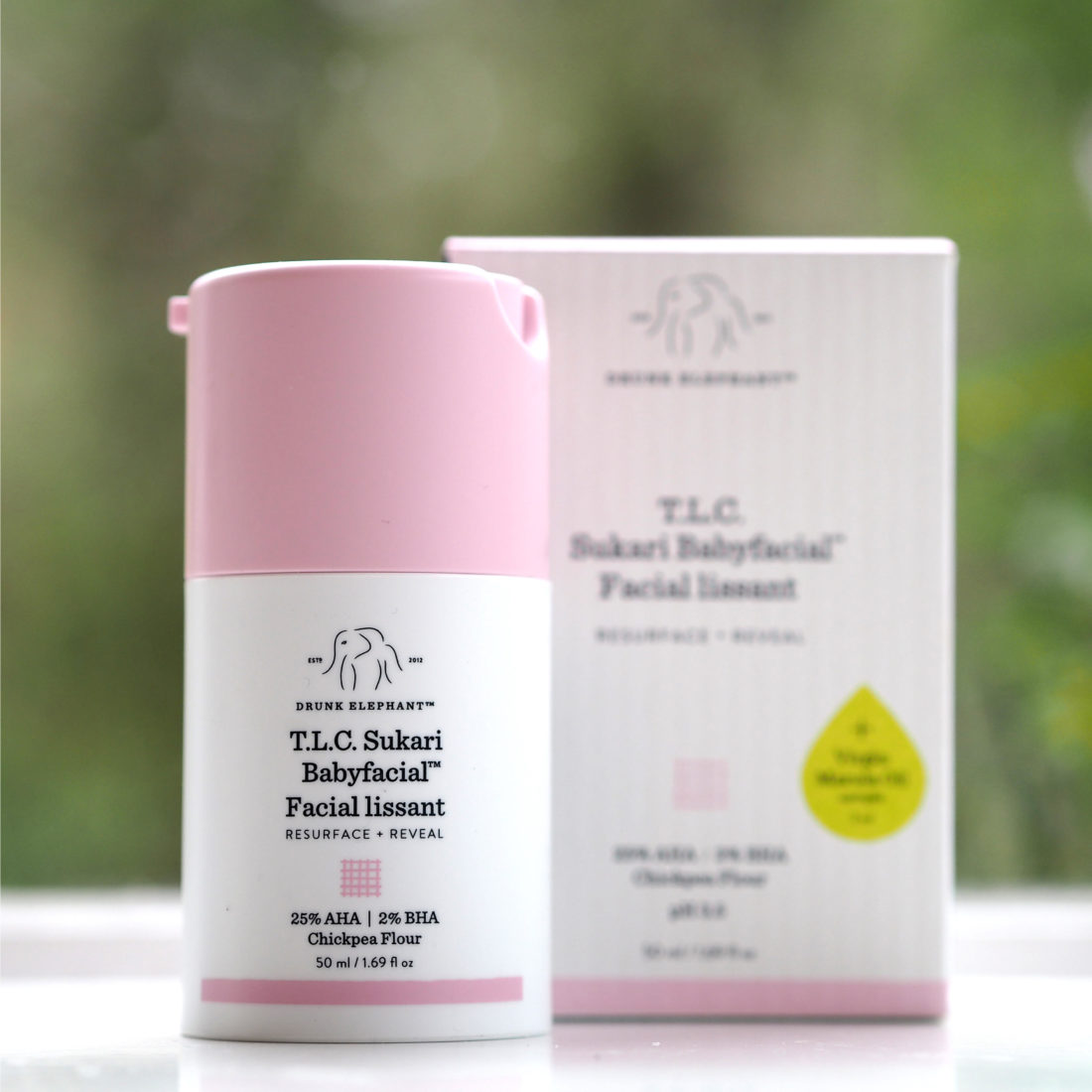 [unpaid/sample/affiliate/ad] Beyond a doubt, this stuff works! The new resurfacer (it’s been in the USA for a few months but it’s new to the UK) from Drunk Elephant is a power performer in terms of leaving the complexion radiant, soft and super-glowy. It’s a potent blend of glycolic, tartaric, lactic, citric and salicylic acids that get rid of the surface dull cells to leave fresh and new in its wake.

It is strong stuff though – as soon as it went on my skin I could feel that familiar prickling which is the acids getting to work straight away. However, it didn’t feel burning or sore and there was very minimal redness so the soothing properties clearly counteract the acids. Namely, aloe, matcha, milk thistle and chickpea flour (the latter mainly for its sebum control). It’s an innovative formula for sure. I’ve looked down the ingredient list and you’ll find that the glycolic is doing the heavy lifting coming second after water (first) with salicylic coming about seventh before aloe vera. Lactic and citric acids are so far down the list as to be what is termed as a ‘marketing dose’, i.e. there to make up the numbers and look nice on the press release.

It’s a great product if peeling is your thing.. probably the best I’ve ever used of its type …with some lovely ingredients in it such as fruit ferments, camellia, passiflora oil and allantoin but I’m going to caution against over-peeling and taking care that you’re not layering peely after peely because AHAs et al are in so many things now. Drunk Elephant recently brought out a skin calming spray to counteract the effects of peeling and it’s my thought that if your skin needs calming down, there was too much peel in the first place. Just from an ingredient legality point of view, you are only able, as a brand, to include safe levels of anything so no matter how you phrase it, it won’t be any stronger than is acceptable in law. For higher strength peels, you need to go to a clinic. Peels reduce the pH of your skin (a movable feast by the way, affected by temperature or weather, but generally bounces back easily to about 7.4) to release a healing action that stimulates new collagen and elastin as well as sloughing off dead cells. Most skin can deal with this no problem at all but my issue is that if you are constantly aggravating a strong healing action, at some point your face will shout STOP! So, use wisely and sparingly – if you are already including exfoliation and peeling in your routine, you may well not need more.

I liked this for being thoroughly efficient and delivering results – my skin is smooth as silk and extra glowy so on that front, it’s a winner. I’m just cautioning not to over-do it – I’d only be using this myself once every couple of weeks or so rather than the suggested twice weekly. It’s got a big price tag too, at £67 HERE, non-affiliate HERE, but if you’re saving it for special occasion wear (such as there is just now!) it should last you a good while. Oh, and super important – wear your sunscreen afterwards, even on a cloudy day. I’ve linked to SpaceNK whose sale is pretty good, even now, spotting REN Gift of Glow for £7.50 instead of £15 and Becca Foundation for £13 HERE.