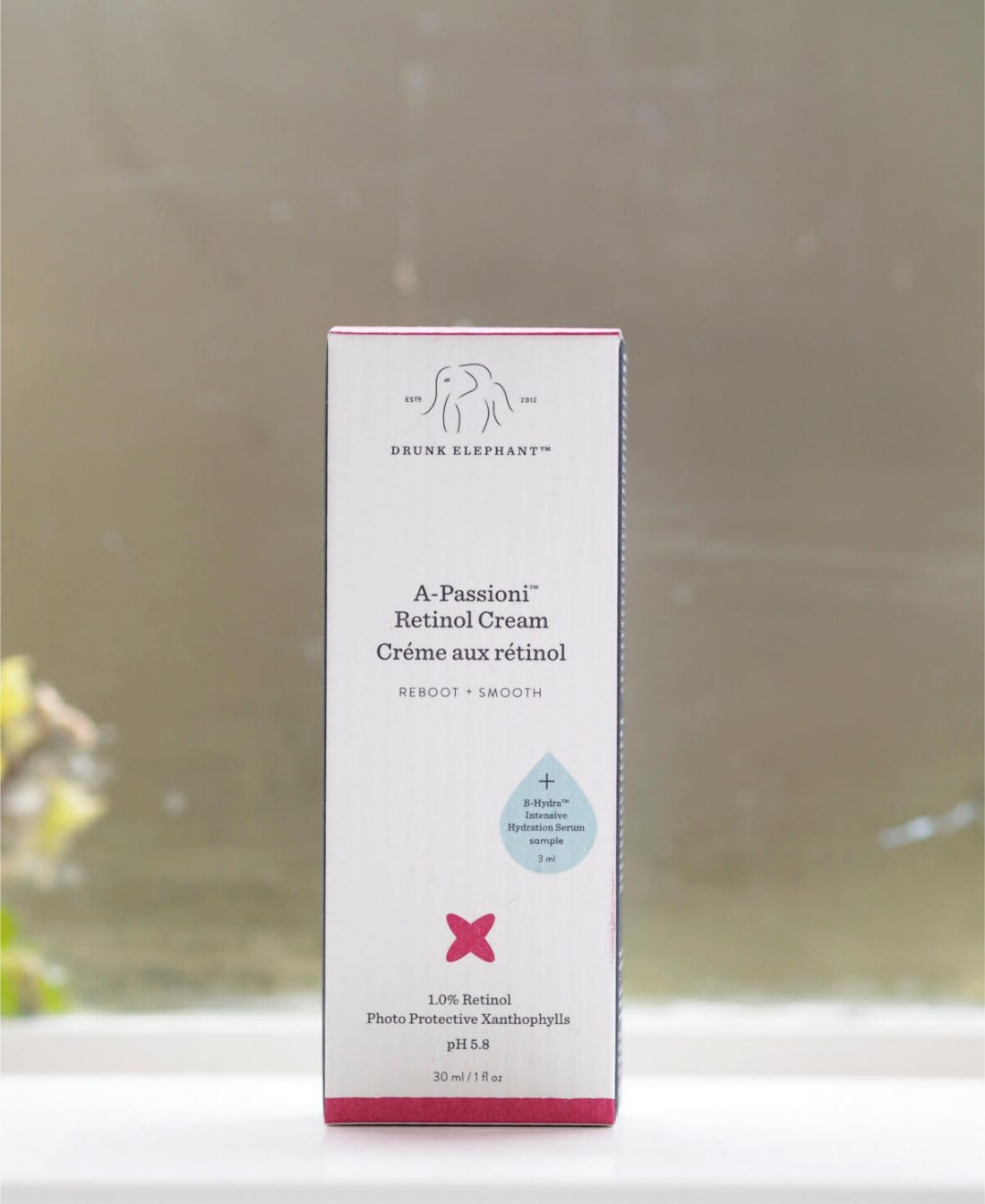 You can’t have missed the hype around the new retinol cream from brand-of-the-moment, Drunk Elephant. A-Passioni Retinol Cream. It uses vegan retinol and while that might seem like part of a current trend, it makes sense that vegan retinol is less complicated in construction than animal or synthetically derived retinol and therefore less likely to cause sensitvity. And that’s the other thing about A-Passioni – it’s made for people who think they can’t use retinol because their skin won’t tolerate it. But, some sensitive skin won’t even tolerate this – at 1% that’s quite strong and if you’re not built for it, you’re not built for it.

If you’ve got a million and one questions about retinol, you might like my Everything You Ever Wanted To Know About Retinol feature HERE so I won’t go into a big explanation about it all in that post when all the info is sitting in the other one. It’s worth repeating though that you need to work up to retinol – especially at this level and especially if your skin is sensitive (although The Ordinary has a 2% vegan retinol product but they don’t claim it for sensitive skin). I’m not doing a long term test of this because I’m mid-way through testing another skin product and have yet another waiting in the wings (one is retinol, one is collagen).

I can say though that while some reviews I have seen have experienced a tingle almost straight away (only a few I hasten to add), nothing happened on my face when I texture trialled it. In fact, it’s very light, smells of nothing at all and feels unobtrusive on the skin. In other words, easy to use. The point about modern formulas containing retinol is that they’ve got good at wrapping it in other ingredients that counteract the main disadvantages (peeling, stinging, redness) so that for most it’s a viable product. In A-Passioni, it’s Vitamin F mainly that’s helping with tolerance but I have to say that the product as a whole has a long, long list of ingredients so clearly, it’s not straightforward to create. The aluminium tube helps to stop the retinol from breaking down – something that its prone to doing – in fact, when I’ve seen the tester tubes in SpaceNK, the residue that sits around the lid has gone a much darker colour than the yellow product it comes out of the tube as which is due to light exposure.

I like the DE brand and the Marula Oil in particular so I’d say you’re in safe hands here if you’re prepared to self-adjust and work with it a bit if needs be. I don’t like the price of £62 for 30ml (especially when there are much more competitively priced retinols on the market) HERE which seems huge, even with the little 3ml sample of B-Hydra Intensive Hydration Serum as an added extra. With Bakuchiol about to be the hot new retinol-like ingredient (actually, it’s a completely different anatomy to retinol but gives similar benefits) any second now that has little or none of the associated side effects of actual retinol, you might want to hold off if you’re consider buying as the first big brand Bakuchiol product launches 1st February.