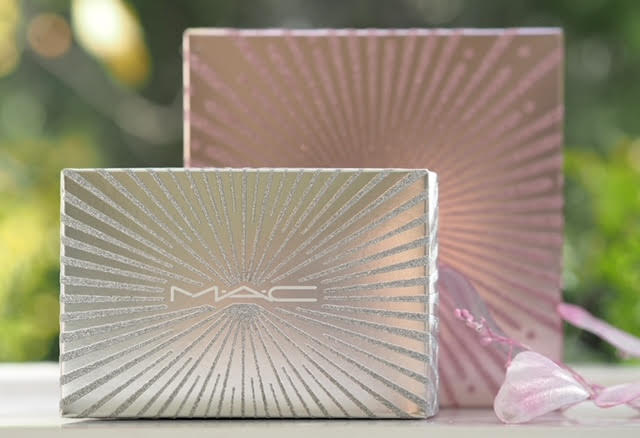 [unpaid/sample/affiliate/ad] I hadn’t realised, when I first posted about MAC’s Festive Firework collection, quite how it was themed around textures. And then, thinking about it, texture in packaging isn’t something that crops up all that often but it’s something that really does elevate the product and make it feel – and look – more special.

I feel pretty impressed with these – they’ve got a nice hand feel – the palettes are almost suede-ish and and the little hairy bag – too cute! I wanted to put eyes on it. I can see how they’ve fulfilled the ‘frosted firework’ brief with mixing metallic with shimmer and sparkle.

This is Fireworked Like Charm (£25 with £36 value) featuring three mini MAC lipsticks – two mattes and one lustre in Rocket Woman, Boisterous and Burst On The Scene.

From left to right: Burst On The Scene, a brickish nude, Boisterous, a wow pinky red and Rocket Woman, a berry toned red.

Actually, this is the only gifting piece I’ve swatched – I’ve spoken previously about trying to second life where possible and I’m hoping to do some annual fund raising (but who knows if it will be possible). If you feel strongly that you’d like the next two items swatched please do say so and I can add them into the post later – but if you feel you’ve seen enough for decision making then we can leave them be.

I’d quite like a sweatshirt in this exact pattern and texture combination! It’s suede and shiny metallic in a kind of dusky pink. It’s the Rocket To Fame Eye Shadow Palette (£30 with £37 value) with 12 different colours.

I’m not blown away by the selection myself which is a mix of pink/purple/neutral tones although I do like the shimmery shades. It’s a flexible palette in that a myriad of looks can be created. I’m trying not to see it just through my own eyes but since I haven’t done anything much more complicated than run an eye stick over my lids of late, I like palettes where each colour isn’t dependent upon another .. mono-shades that work as a dash of colour on their own but this is very much geared to multi-toned eyes. But, given that it’s gifting, I think we all know someone still prepared to get their blending brushes out. I think it’s good value, too.

Yet again something I’d like in a top! This is a bit like flock with streaks of glittery silver running through. It’s the Flashing Ice Extra Dimension Skinfinish Trio (£30). Is it just me or is MAC being much more reasonable with prices this year? I feel that in the past gifting collections have cost more.

I like this best of all actually – it’s spectacular both on the outside and on the inside. This is the Light version but there is also a Gold version. It’s got plenty of longevity so even if festivities are pared back this year, it’s easily translatable to summer highlighting and surely we’re not giving up our glow! Each shade can be used as a wash of shimmer on lids as well or even, if you feel adventurous, mixed in with a bit of gloss to rev it up. November is a moody month anyway – nobody feels like doing all that much until December hits and then we’re more in a glowy thinking way. It’s hard to predict, isn’t it? Anyway, as I say, if you feel you need more visuals for decision making, please do let me know, but otherwise, everything is HERE, non affiliate HERE.

a limited-edition holiday palette of 12 neutral, blue-green, pink and purple eye shadows in a rang