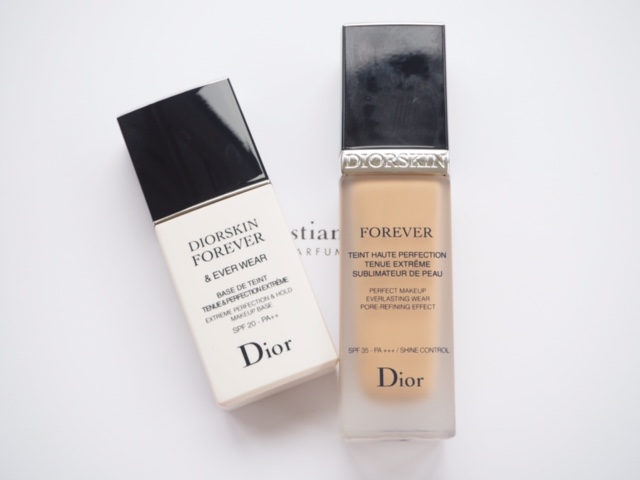 I’m slowly getting through my Dior new launch catch up – on the home run, but they’ve been busy bees! Next up is the new Diorskin Forever Foundation. I like Dior bases in general but this one’s matte and I am not a matte base fan. However, there is something much gentler about this formula that the drier, skin deadening matte formulations that I’ve tried in the past. In fact, I wore it (with the Primer) on Thursday evening to put both though their paces before I’d read the press materials and didn’t realise it was matte. Deadening, it is not. Dior say that it’s down to two powders – one to mattify and one to reflect light – but I say whoever formulated this deserves a large glass of something bubbly.

With primers, the proof of their hold is in how much make up you’re taking off at the end of the day. I found the texture light and fluid – really comfortable in the wear – I can’t say I particularly noticed a blurring effect – but I did have plenty of foundation still  to remove by the end of the evening. I’d be mixing it in, I think with the Diorskin Forever Foundation, for a lighter finish if needed.

I have shade 30 here, but there are 12 shades in total, with a very decent SPF35 rating.

Since we’re talking about bases and faces, I’m tagging on the Diorskin Nude Air Powder, part of the Milky Dots Summer Collection. It’s a whisper of a powder, it’s so finely milled, but very high on shimmer and pearlescence, so you’ll really need to love that burnished, metallic finish on your skin. It’s not one for me, but I can see in high summer, it can do all the light catching in the world on your cheeks.