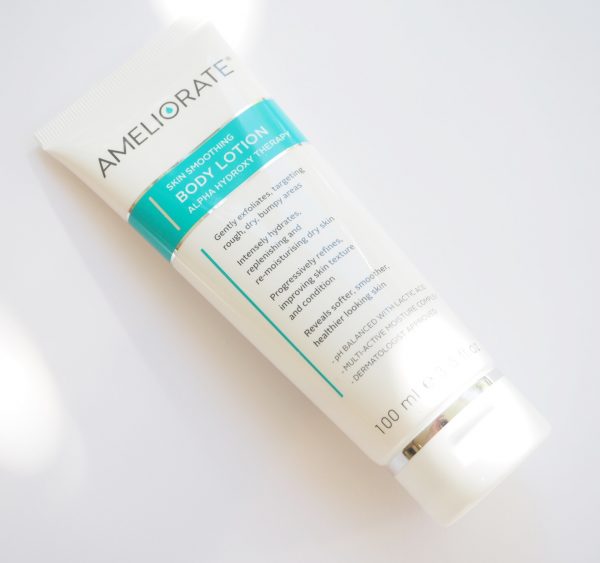 I’m giving this product another outing – I first reviewed it back in 2014 but given that it’s peak summer, legs and arms out time I thought it was worth reminding you about. I said back then it would make my top ten all time products that really work, and I stand completely by that: if you have bumpy skin, Ameliorate Body Lotion is salvation.

The formula contains lactic acid – and believe me, it’s hard to find body lotions that contain lactic acid – which is the key to everything in terms of exfoliation. So, it’s moisturising and exfoliating (using enzymes) at the same time. I don’t know why all body lotions don’t just whack in a dollop of lactic because it’s the difference between a great body lotion and a completely amazing one. Those annoying bumps that traditionally appear on the backs of arms and tops of legs can be a devil to get rid of – physically exfoliating them away can make things worse, especially if you have sensitive skin. The bumps appear when too much keratin is produced and builds up inside hair follicles, sometimes trapping the hairs and leaving extra big bumps on top of the small bumps!

Give it a week or so and you’ll see a transformation and your skin will feel and look incredibly silky. It’s £27.50 for 200ml – I’ve done a quick scoot about and found Ameliorate Body Lotion 100ml size at ASOS for £17.50 HERE which might be a better option to see if it works well for you. I’ve found a cheaper lotion containing lactic from Eucerin for £13 ish HERE which might do the job but I haven’t tested it and can’t work out the % difference of lactic. In terms of making it last longer, just use it on the parts where you have bumps rather than the whole body (although I think once you’ve done whole body you won’t want to stop!) and use a different moisturiser where skin is clearer such as torso.