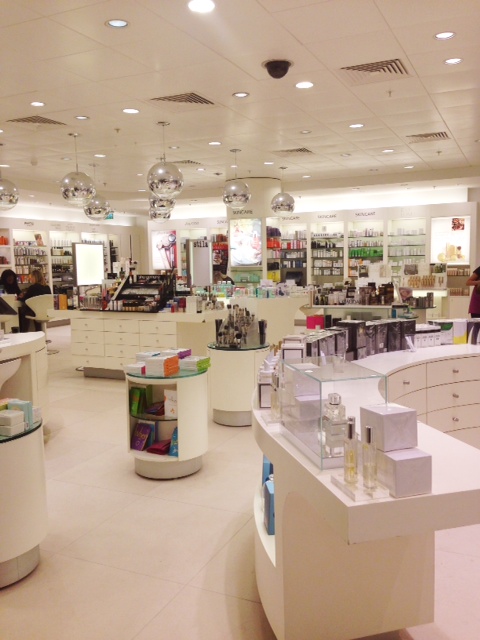 If you follow my timeline on Instagram – or even Twitter – then you’ll already know that Fenwick Bond Street is my favourite London store. I’m there at least twice a week… sometimes more (for meetings in their 2nd floor restaurant – not actually shopping, although there is almost always a purchase!) so I’ve watched the miraculous transformation of the store from drab to fab. Fenwick was a bit of a dinosaur – I love that in the restaurant you can see any variety of people from elegant older ladies with grey chignons and Chanel sunglasses to a whole gaggle of PRs using it as an out of office strategy meeting place – but it’s shaking off that dusty image and replacing it with a brand new, shiny, exquisite one.

If there was any place in the whole world I’d like to be accidentally locked in overnight, it’s the third floor of Fenwick – the best jeans, the nicest clothes; loads of Scandi and boutique brands that are knocking it out of the park fashion-wise. The ground floor now has a shoe section – who knew Aerin Lauder did shoes? But she does, and they’re there. The beauty section is split into two – one section that’s lively with innovative new brands and trend brands such as Paul & Joe. The other is more sedate with Clarins, Bobbi and several other counters where you don’t get chased down the aisles to test a fragrance sample or lured in to try a free mascara that’s only free when you put down your life savings on the super expensive face cream. The sales assistants are the least aggressive in London so it’s the perfect place to have someone’s undivided attention for advice – or not. It’s all good – if I’m ever asked for a recommendation on where to buy beauty, I always say Fenwick Bond Street. I’d say the same for fashion – there are no sharper fashion edits than in Fenwick. Better yet (for the customer), footfall is low, so you’re never bag-bashed like you are in Selfridges.

But, it’s a different thing when you just love a place naturally, than when you’re asked to love a place professionally. I have zero relationship behind the scenes – they were super keen to capture the blogger love initially but when they cancelled meeting after meeting in a we’re-doing-super-important-things way, I gave up and declined to follow up subsequent arrangements – nobody wants the ‘most cancelled’ badge. Today I got an email asking me to flag up an event that the store is doing around beauty, so I took a couple of pics to illustrate and instantly got security and a sales assistant telling me I couldn’t take any pictures – “they’re not allowed”.

I don’t think I’ve ever been asked not to take a picture in a store before (maybe back in the day before blogging was a thing) – most stores get it about social media and the massive sway it can have in directing consumers to places they’d never think to go otherwise and highlighting cool products that can sell out within the day. It’s like the right hand doesn’t know what the left is doing at Fenwick – on the one hand they want to ‘utilise’ bloggers but on the other hand they don’t get the crucial social bit of social media. I don’t see a lot of re-tweets and re-grams going on either – brands that don’t do the social bit of social media end up with timelines that are just streams of info with no interaction. And, just boring. They never really get a feel for who their followers are, so there’s no real way to target well. Interaction is information.

So, it’s a bit of a shame that my favourite London store is so disappointing in those areas- even more so for the brands they stock – but it’s made me wonder what your favourite beauty and fashion stores are? The ones that interact really well with you and make you feel like part of an important customer group? I know that Harrods has one of the best social media teams I’ve ever come across (and I hardly ever shop there) and that Selfridges are takers not givers in the social media world, but other stores, I don’t really know if there’s any store who has it bang on? If you know different, please tell me!

Anyway, please know that the pictures in the piece are the ones that aren’t allowed. #badface

NB: The following day, Fenwick revoked the no-photography rule. I had many emails on this subject so I’ll cover it in a separate post, but one of the issues brought up was by someone who worked at Harrods, where you are not allowed to take pictures for security reasons. It’s totally understandable if someone is taking pictures of store layout and acting suspiciously but an entirely different thing to a blogger taking a picture of a lipstick or a bag. I think common sense has to apply – if you’re being weird and taking unreasonable amounts of pictures, then someone will pull you up on it, regardless of photography rules. If you’re taking product pics to share on social media, and someone asks what you’re doing, tell them. As I understand it, this will be okay from now on at Fenwick.

Final point, Fenwick picked up on this post very quickly much to my surprise (it’s impossible to know who does and doesn’t read this blog) – they’ve surpassed all expectations (not that there were any on my part) in trying to rectify everything and become a more social media friendly brand. I’m looking forward to following their journey and encouraging them to get social and in the meantime, they’ve listened, responded and learned. You can’t really ask or expect more than that. Although they’ve declined to lock me in on the third floor overnight with a bag marked swag ;-).

Oh, and finally, Paul & Joe is no longer there. Considering how often I am in that beauty hall I have no idea how I didn’t notice this.