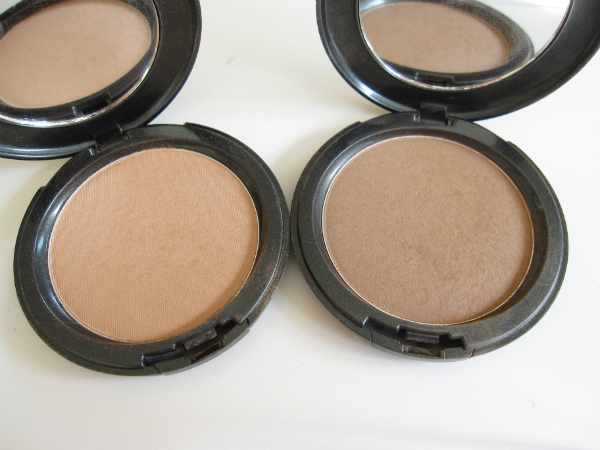 So, the Cover FX Bronzer and Iluminator look a little sought into because they are! Florrie White kindly lent me hers from her make-up kit because there weren’t any samples at the launch I attended. I fell in love with both of these beauties straight away and wanted to strike while the iron was hot.

Much as with the Liz Earle Bronzer that I’ve been raving about, Cover FX Bronzer is kind of a starter-bronzer – it’s not brickish in any way, barely any orange tones and just adds – with a sweep of a kabuki – a similar warmth to the complexion that Chanel Healthy Glow Powder does. It’s not really for contouring or going heavy on tan tones; more of a gentle lift of tone. And, as far as glitter goes.. I can’t detect any.

I’ve swatched both the illuminator and the bronzer at intensity – they’re far less obtrusive when swept on with a brush, but you can see a glitter-free glow that’s both natural and enhancing at the same time. You’ve ever been nervous of illuminators or bronzers, I’d highly recommend these as a great place to start. The Bronzer Shade for exact match is Suntan, but there are a couple of others available… I’d say though that Suntan is a universal shade. They’re £25 HERE. Both are boosted with extracts such vitamins and antioxidants although I’m not sure such a light dusting will make any real difference.