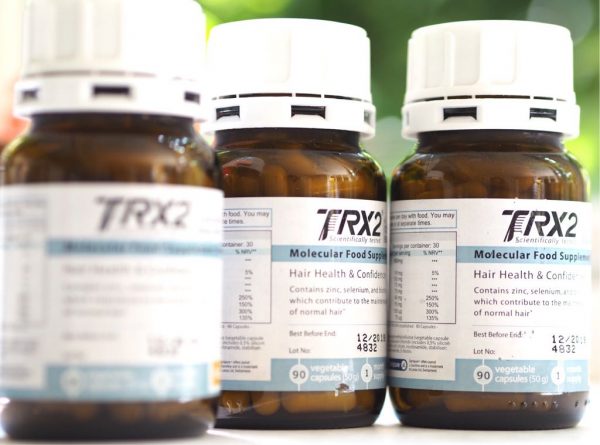 Hair loss is one of those very tricky subjects – it can be caused by a variety of factors which is one reason that it’s difficult to treat. It could be hormonal, genetic or even diet, but studies have shown that those who experience it tend to show a reduced potassium channel activity.

A what? Ok, so potassium channels are small pre-forming protein structures that carry nutrients to the hair follicle membranes. Having only just brought you the news that they even exist, I’m afraid I have to tell you that they wear out! Over time, they just don’t work as efficiently meaning that nutrients don’t get to the hair as well as they used to which can, in turn,  lead to thinning hair. Once you get into the underbelly of just how gene expressions show themselves, it’s absolutely fascinating – and incredibly complicated.

I’m yet to try TRX2® , but I am very interested in all supplements so it’s a pleasure to try and drill this one down for further knowledge. I do know that hair loss is a confidence drainer – no matter how much positivity you throw at it, it’s difficult to deal with on an emotional level for many (men and) women. I’m absolutely about accepting difference and perceived imperfections but I’ve seen friends go through it and really, it’s tough. And, one of the reasons I take hair supplements myself – if I can ward off thinning, I’d rather.

TRX2®  uses Potassium chloride, L-carnitine, L-tartrate, BCAA (branched chain amino acids) and Nicotinic Acid, plus Biotin, all devised to stimulate the potassium channels. It’s drug free, vegetarian, not tested on animals and free from preservatives. The company, Oxford Biolabs, was actually founded by former Oxford University scientists and products are manufactured in Germany. The founder, Dr Thomas Whitfield looks about 16 so I’ll have what he’s having, thanks very much!

I don’t need to tell you that results can vary, but this supplement does have solid scientific findings. I’m pretty much on the edges of my understanding reading the results (especially as they’re using symbols that I have never seen before in my life – I’ll give you p<0.001 as an example!), but can tell the difference between the placebo group (some people lost hair – imagine if they thought they were on the real thing!) and the testers. Oxford Biolabs measured hair weight and hair number as well as something called ‘terminal hair’, thick, dark and longer hairs (compared to vellus hair which is fine and thin). The study took place over 18 months with 59 participants (47 men and 12 women) aged between 18 and 58.

The upshot of the study showed that the supplement needs to be taken long term – results come with time. After 18 months, the average result for hair count was +49.2%. For thickness, it was +38.7% and terminal hair change (from vellus to non-vellus) +36.4%. The group was also tested after 9 months, with decent results, but they were better at the 18 month stage. In fact, you can see all of the results on the website, which I’d recommend anyway as an educator for all types of hair loss for both men and women.

The one thing I can trial is the TRX2®  Hair Thickening & Styling Cream – that works on any type of hair but obviously is devised for thinning hair. It really does push up the volume either on dry hair or after washing and it’s impressively weightless and smells fruity-minty. It worked quite significantly on my fringe actually which is thinner than it used to be and I’d definitely use it again to give it blast of volume. It’s £20 (HERE). I can’t stress enough what a tiny amount you need – don’t over-do it.

TRX2 is expensive – we can’t get around that one – but no more than a luxury end face cream at approx. £48 per month (there are value packs). The brand makes no bones about the fact that longer you use it the better the results will be – so one month’s supply won’t make any difference. Most of the people in the trials started to show real results at around month 9. It’s a commitment, that’s for sure, but do look at the before and afters to see if you feel it’s right for you.