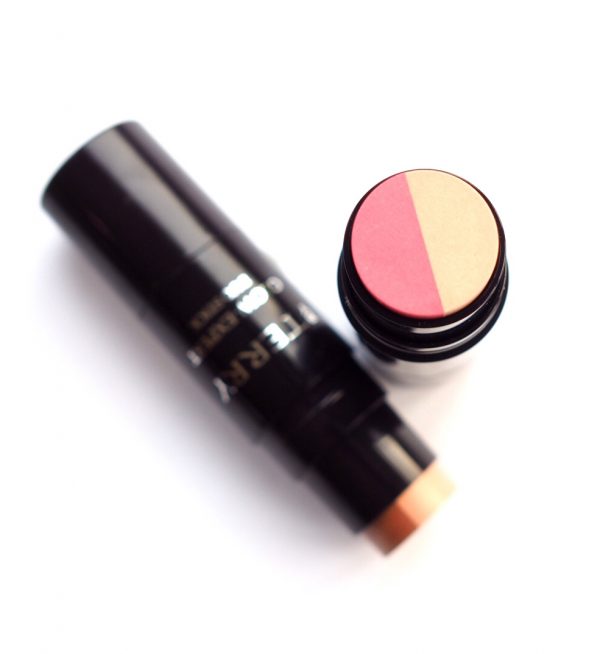 By Terry’s offering for spring is officially called Techno Aura – it’s about changing lights with interstellar elements – I ‘kind of’ get the flight of fancy here, but if we leave space behind, what it comes down to is what I think is one of Terry’s best ever products; the Glow Expert Duo Sticks.

With both a blush and a highlight (or bronze) shade in one stick, the Expert Duo comes with a stubby diffusing brush at the other end so you literally swipe and blend. They’re a more grown up version of the strobing trend giving both colour and luminosity in a very easy way. They have high sheen and are a little bit twinkly but the blush colours are flattering in coral, bronze or pink so you’re winning from the get to. The highlight aspect is a light gold that perfectly compliments the blush shades – when you blend them together with the brush it’s a light-catchy, cheekbone enhancing pop of joy. I think they’re a lot more summer than spring – these need a hot day and some enlivening rays of sunshine to really come to life, but oh – they’re lovely!

The Palette, Techo Aura, is a different thing – it doesn’t quite seem to match with the cheek sticks. This is an ice-cream colour palette – plays on neutral with creamy pinks, yellows and ashy rose: it’s really so discreet that on the eye, you’re hard pushed to distinguish one pale shade from another.

They look pretty all together in a row but separate them out and they’re just not exciting – rather flat, in fact. All the usual By Terry quality is there, by the way, I’m personally not that wowed – it’s like she took the unicorn out of something that could have been, thematically speaking, stellar.

This time, Terry has gone for an oil-on-water look for the Gloss Terribly with light reflectors in a pink-bronze shift. This one is called Midnight Star but I think there may be a couple of others. On the one hand, it feels like the 80’s came knocking and yet on the other, there is something very modern about the shade-shifting of it. To be honest, that’s what Terry de Gunzberg does best – putting the grown up into trend: shade shifting is very much Urban Decay territory, but this is going to appeal to a different audience because it feels more sophisticated.