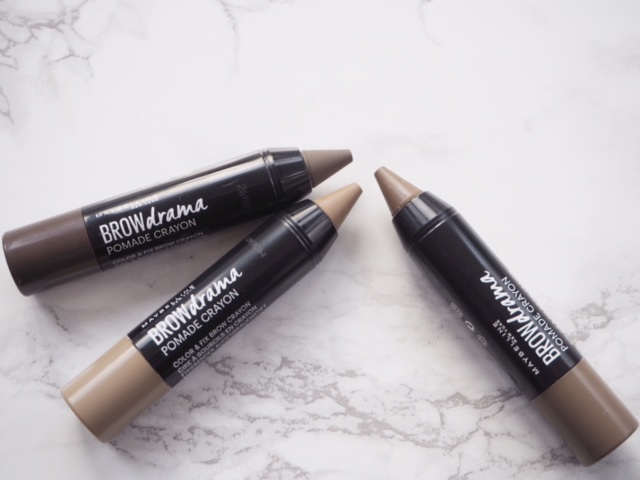 The Maybelline Brow Pomade sticks are brilliant! I don’t do a lot with my brows, mostly because they’re hidden under my fringe most of the time, but also because personally, I don’t like the very groomed look; I can’t imagine that kind of gleaming, brown, two seals thing on my face. However, my brows do need a bit of colour adjustment sometimes, depending upon where I am in the hair dye fade out!

The Maybelline Brow Pomade pencils are just the simplest little sticks to give a deeper colour and a little bit of flattening down, if needed. They’re very similar to the MAC Big Brow Pencils launching in March. Except these are £5.99 each and I’m making an educated guess that MAC’s won’t be! The texture is lightly waxy, not greasy, and depending on what effect you want, light sweeps instantly define. I use a spoolie straight afterwards as a brush through, but if I was rushing, I probably wouldn’t even bother with that. If you’re not going for a feathery sweep in-fill or your brows aren’t sparse, they’re such a doddle, although obviously if you do need more precision, a brown pencil with a finer end will be of more use.

Maybelline Brow Pomade is a great budget buy – nothing not to like; oh, and they’re self sharpening (just twist the bottom). All my links are broken today (being fixed asap) but these are on Superdrug, buy one get one half price.