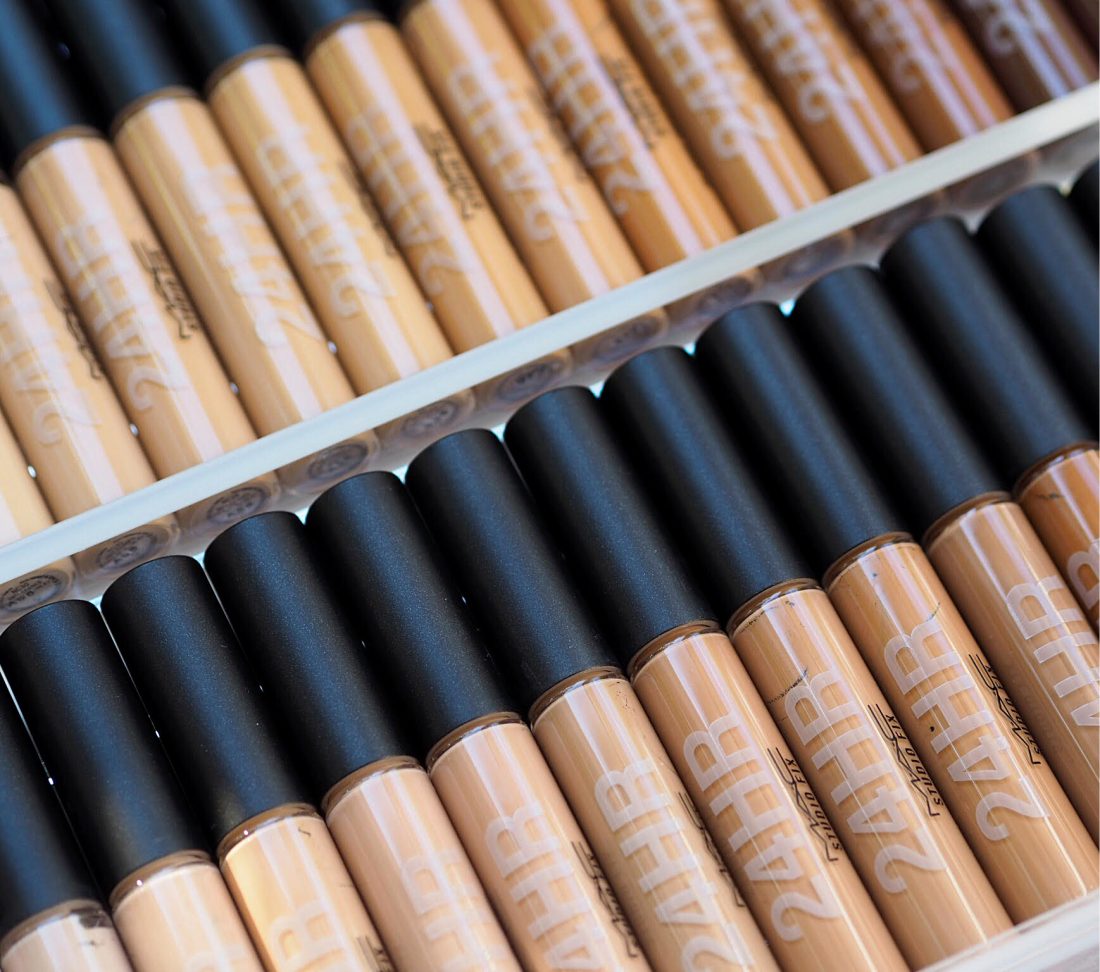 Looks like a lot of shades? It IS a lot at 33 individual colours running through the skin shade spectrum seamlessly. This kind of fine tuning is what MAC does best – and always has. I know we complain endlessly that there isn’t enough diversity in product tones but MAC has been a front-runner in this for ever. Actually, I was on a panel last week in Covent Garden and an audience member asked me what I thought about availability of multi-tone products.

It was a great question because while yes, of course there should be a shade for every single one of us, there is more than one reason that this hasn’t happened in the past. As a journalist I was always fobbed off (because I’ve been asking this question for years) with the old ‘not enough demand’ chestnut. The real reasons are always financial – several years ago, brands that did want to expand their offerings were scuppered by retailers who wouldn’t relinquish valuable shelf space to products that might not sell quite as well as others. Smaller and more broad thinking brands that could see the need for a more inclusive foundation spectrum found it financially impossible to fine tune as MAC does and ended up offering a few generically darker shades that didn’t please anyone. And, bigger brands that sold well to women of colour in other countries (i.e USA) didn’t want to find the UK a resource drain when we are so much less populated than America and therefore would obviously not command the level of sales…and to be fair, were told by UK retailers there was low demand.  To be completely frank, ten years ago, women of colour were more or less ignored. Social media has really changed everything for multi-tonal foundations – before we could see, via the world wide web, what other countries offered their women of colour, perhaps we just didn’t quite realise how bad it was. But once you’ve seen, you can’t un-see. As soon as Instagram took hold it was so much easier to add pressure and voice opinion. Fast forward to now and the inclusive campaigns from L’Oreal and the like, no brand can be in any doubt about whether the demand is there. We are all better served, in terms of inclusivity, than we were a decade ago. As ever, there’s always room for improvement.

Anyhow, back to this new concealer! It’s nicely lightweight and gives what MAC calls a ‘natural matte’ finish which always raises alarm bells for me. Concealer needs to be lightly fluid in order not to seep into creases (if you have no creases, you’ll have no concerns) and the more a product is matte, the more powder it contains which isn’t a crease’s best friend. However, there is a creaminess to this formula that doesn’t seem to give way to cakeyness – actually, it’s pretty forgiving. In terms of wear, I (obviously) didn’t put it to the 24 hour test but I felt that it gave me the day which is good enough for me. The pigment is high but you can build if you need to and it doesn’t affect the performance.

While my son’s eyes lit up at this plethora of concealers (he is convinced he has dark circles) I’m not much of a cover-up wearer but I’m a bit more convinced after using this. I could see a clear difference between the under-eye that’s concealed and the one that isn’t and it’s enough, along with lack of seeping into creases and flexibility on the skin, to make me think I could become a regular user for a full face.