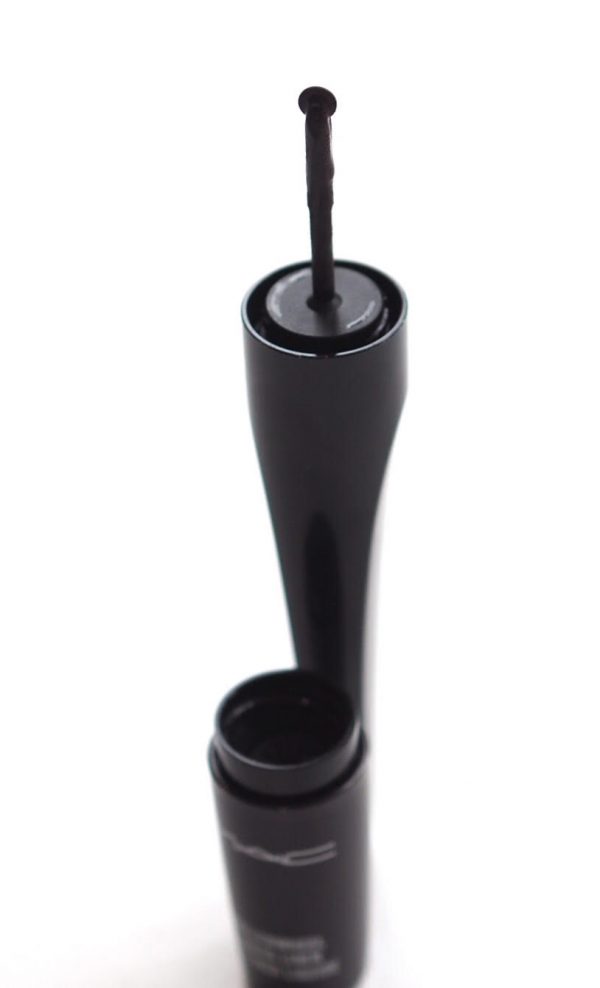 The MAC Rollerwheel Liner was showcased backstage in February – looks gimmicky, right? I wasn’t backstage this time with MAC so didn’t see it in the flesh, so to speak, but I’ve got it now and have been playing with it over the weekend.

It’s an absolute devil to photograph! Partly, it’s because it’s all one colour and also because the wheel is so tiny. But, it really does work. I did both eyes a couple of times and got them right first time, both times, which is unheard of for my wobbly hands. Partially, it’s the smooth running of the wheel, but also the handle grip is just right. This really feels like a thought-through product, both in weighting and in sizing, so that the user experience is good.

This is a very close up of the line that I created on my arm, which oddly, turned out to be far more difficult to do than on my lids. I have the brown shade here. I’m pretty impressed with it – it does seem like a different and stable enough application method for it to be quite useful for those who struggle with their lines. The one thing I would say is that it does seem to give rather a thin line – it might not be ‘fat’ enough if you like a very obvious line. I’ve seen some pictures on Instagram that suggest a ‘razor’ sharp line. I think in the right hands, that’s possible, but human skin doesn’t really allow for that ultimate precision definition line, so for non-professionals like me, I’d put it more as ‘a great improvement on previous attempts with a liquid liner’!

I don’t have any further details on it yet – I think it’s late summer/early autumn.