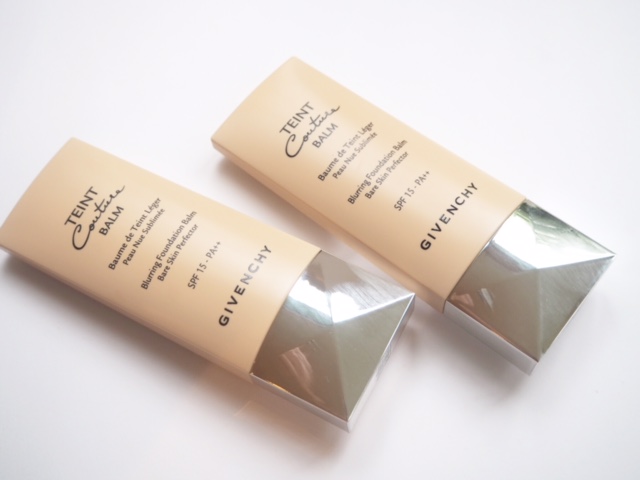 It’s with good reason that Givenchy has billed Givenchy Teint Couture Balm as ‘the bare skin foundation of your dreams’.  It is stellar. Mainly because of the ‘blur’ aspect which gives skin such a beautiful finish. Don’t think old fashioned ‘blur’ – all silicone and gloopy – this time, it’s in a more sophisticated texture that’s built into the foundation that just kind of ‘softens’ rather than an out and out obliteration. I don’t necessarily agree that it’s a ‘bare skin’ look because I find the coverage sits in the medium rather than light spectrum and to me, it’s more a ‘finished’ look to skin rather than a no-make up look.

I’ve got two shades from either end of the spectrum, neither of which are a natural fit, but by blending them together I was able to do a passable match – enough anyway to put it to a wear test. The finish is quite lumious so there’s a non-oily looking sheen to skin, which is something I love, and in a way feels a little ‘balmy’. In terms of wear, it doesn’t feel ‘barely there’ – but I don’t think that matters because the look of it makes up for everything – even the fact that it’s got a bit of a transfer issue.

If you can get a good shade match, Givenchy Teint Couture Balm is one of the loveliest and most flattering bases I’ve come across for a while. Given that it launches in September (£29), the timing is good for the extra luminosity that skin craves come autumn and winter. I’m definitely going to hunt down my exact match when it hits the stores.

Meanwhile, if you’re feeling spendy, the Givenchy Make Up Must Haves palette that was a World Duty Free Exclusive is now available at Escentuals (HERE) for £39, along with the Eye Essentials Miniature Set (£34) HERE but both have 20% off.

I can tell you that there are only 15 of these sets – they sell out so quickly, so if you’re going, do it now!

Finally, as a bit of a scoop, hang on a few weeks (October) for the gorgous Givenchy Dahlia Divin Le Parfum En Musique – Dahlia Divin fragrance with a music box shaped like a spool of golden thread that plays a tune composed by Alicia Keys.

The funny thing about Givenchy is that it’s actually a very inventive and creative brand – it just doesn’t seem to get the exposure it should have (although the Givenchy BBB box sold so quickly). They’re always up for being adventurous, trying new things and creating limited editions across all markets and yet seems to slip in behind other premium brands such as Dior. I wonder if maybe they’ve got so caught up with being ‘sophisticated’ that the fun side doesn’t shine through enough – premium these days is a shifting market and when you’re contending with brands such as Benefit and Urban Decay that have got quality, fun and adventurous locked down (and not too much of a price difference), I just feel that Givenchy needs a better chance to shine.