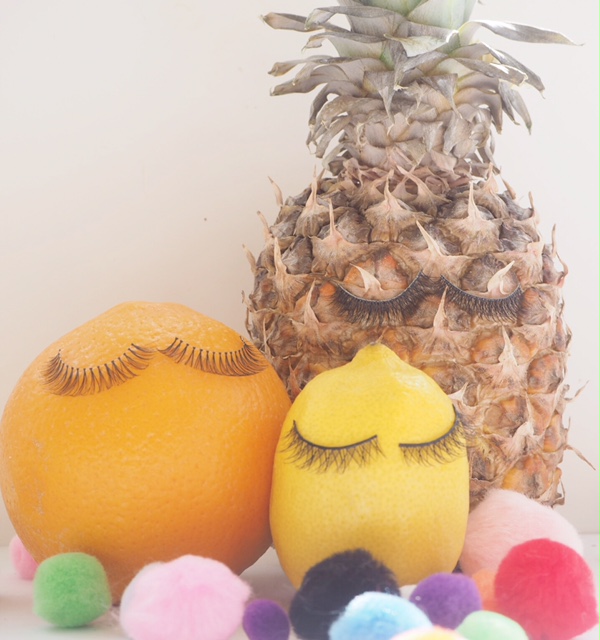 The fruities are back! Sad to say that Eylure very kindly sent me an entire catwalk of fruity models – look away now if you’re sensitive – all of which, bar the pineapple – have been blended into delicious smoothies. I know and I’m sorry. However, I’ve managed to scrape together a selection of models to show you the Eylure House of Holland Fluff Lashes collection. It’s a really weird thing, but I keep crossing paths with Henry Holland – he was one of the very first people I ever followed on Twitter, and subsequently I’ve seen and met him at several launches, most recently a month ago at MAC. I remember exactly his tweet, “And that’s why I never go to the doctor,” which said so much about how I feel about going to the doctor in only a few words!

So, Orange is wearing Ruffle with an individual lash effect,  Lemon is wearing Buff with a crosshatch for extra full looking lashes, and Pineapple is wearing Luffly with a taper tip and layered effect. None of the sets are crazy thick or long so these are good starter lashes I think – I’ve been seeing some very extravagant lashes lately and while I get it that it’s a ‘look’, when they’re so heavy that the glue can’t even hold them and they’re peeling off at the corners, then it’s not a look for me! I’d definitely wear the cross hatch pair although I still can’t shake the feeling that I’d lose one, never know and look odd for the day. I also get a big craving to peel them off – I took out my contact lenses at the station a few months ago because they’d been in all day and I’d had enough and in a rare litterbug moment flicked them onto the tracks only for one to attach itself to a passing man’s jeans. That could happen with lashes, I’m sure of it.

The Eylure House of Holland Fluff Lashes are £5.95 and available now HERE.