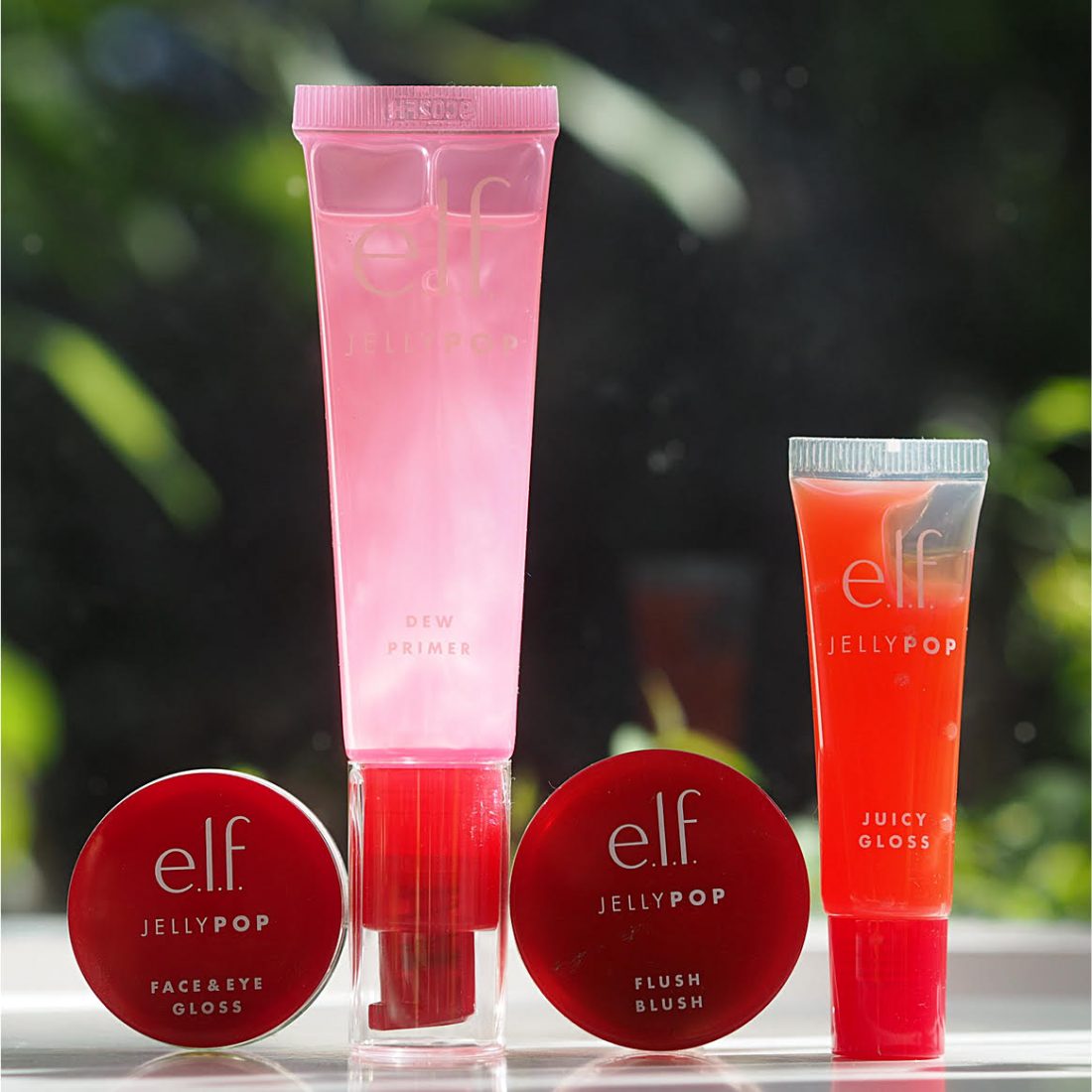 [productsample/affiliate] Affordable brand, e.l.f. (eyes.lips.face) has a few new arrivals and after the onslaught of luxury brand launches it’s quite a relief to find things you can pop in your basket without feeling a little trace of guilt.

I’ll start with the Jelly Pop Face & Eye Gloss, part of the Jelly Pop collection (which is a whole and expanding Korean inspired section all of its own featuring make up and skin products). There are two shades – Icy Pop (above) and Creamsicle Pop which is a champagne gold.

My nearest comparison for this would have to be the MAC Eye Gloss – and eye gloss is not an easy thing to wear – but it’s a little looser than that. If you’ve never worn an eye gloss, your lids will feel sticky but it might be worth it if you’re up for a selfie looking like a constellation appeared on your lids. It’s so shimmery! At £6, it’s distinctly cheaper than MAC and gives pretty much the same effect (and stickiness!).

Next up, the Flush Blush in Berry Pop which is far more loose in texture than you’d expect. It’s fluid in a pot, basically, but because it’s a flush or cheek tint rather than a full-on blush, you need just a dot on your brush or finger to get a colour wash that allows your natural skin to show through. There is a metallic element to this which is unusual for a flush product, and it’s also £6. Oh, I should say that everything has a watermelon scent – I love watermelon, but if you don’t, you need to know this before you buy!

The aptly described Juicy Gloss (it’s very juicy) is also very sheer, in keeping with pared back colours for the face that allow skin to do the work when it comes to a fresh look. There’s a little hint of peach colour in Apricot Pop but otherwise it’s a straightforward lip glaze for a high shine and light reflections. It’s £5.

The Dewy Primer is the only product I had doubts about because it’s just a little bit tacky at first. After a time though, that sensation disappeared and it acted like a primer should. I didn’t test it for long enough to see whether it held make up over the entire day but it acted as a decent, non-oily base. There’s a dash of niacinamide and hyaluronic in it as well as vitamins and watermelon extract with the first two likely to be the more effective as skin care but they’re coming 8th and 9th on the ingredient list so it’s more for first skin care than skin that needs more than the minimum. It’s £10.

In the swatch you can see the eye gloss, the lip gloss and the flush blush – I’ve swatched at a much higher intensity than you’d actually wear just so you can see the shades and the illumination properly. I think this is fun – I’m not sure it’s for me (unlike their brow grooming products that are for everyone and are remarkably good) because I’m probably a good few decades past the age it’s meant for, but if I stick to my own principles that make up is for everyone – why not! You’ll have to like watermelon though! You can find everything HERE. I’ve got some further e.l.f. posts for next week – their ‘Super’ skin care is one to look out for.