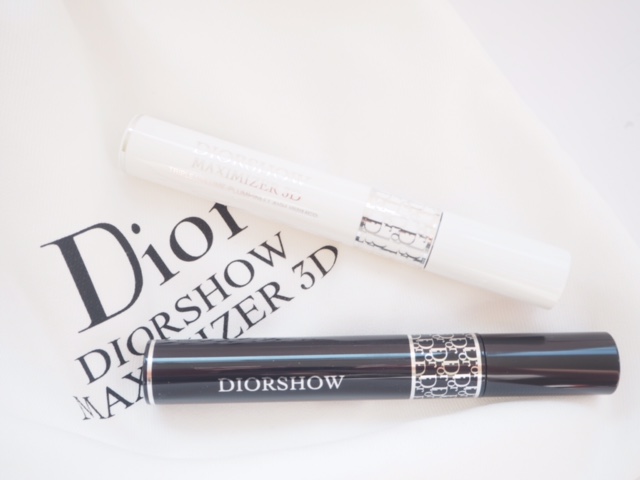 This ghostly looking lash primer really does work! Diorshow Maximiser 3D Triple Volume Plumping Lash Primer is part of the forthcoming newness for Dior’s Backstage collection. There is a previous incarnation of this but it’s been given a make-over. I don’t remember ever using the first one, so I can’t compare, but despite the fact that whiting out your lashes is an odd experience, when I added a navy mascara over the top, my lashes looked so long! I didn’t find it made them really fat – in fact, I think it improved lash definition which can sometimes get lost with lash fatteners. I tried it with a Dior mascara and a MustaeV mascara to see if it performs as well with any brand and it certainly does.

Adding to the existing Diorshow Mascara shades are four new colour (Pro Navy, above) including a deep wine colour that I cannot wait to get my hands on. Even though this is a dark navy, it still doesn’t put me in the same comfort zone as black.

The new waterproof Pro Liner in Pro Navy is another matter altogether – it’s an intense deep blue that literally glides onto the lid. I’m wearing it right now and thanks to the angled edge, got it right first time. However, quite what you do when you lose the sharpness of the angle, I’m not sure. Maybe you never do… I am not nearly far enough into it to tell! As you can see in the picture above, there are some new Diorshow Monos on their way – the foiled silver above is called Techno and it’s simply one of the shinest shadows ever.

It’s above and not even taken in light – but next to the liner in Pro Navy.

And here it is, light hit! It’s very impressive. So, almost everything coming out of Dior at the moment is hitting the spot – I know they now have ex-Chanel Peter Philips but it’s maybe too soon for his influence to start coming out in collections because I know this brand works early for releases. It’s not unusual for bigger brands to plan for up to two years in advance – that’s something that’s going to have to change if they’re to keep up with the constant releases from smaller brands who have the mechanics to be more reactive to trends happening right now.

All of the Dior Backstage newness rolls out in June.