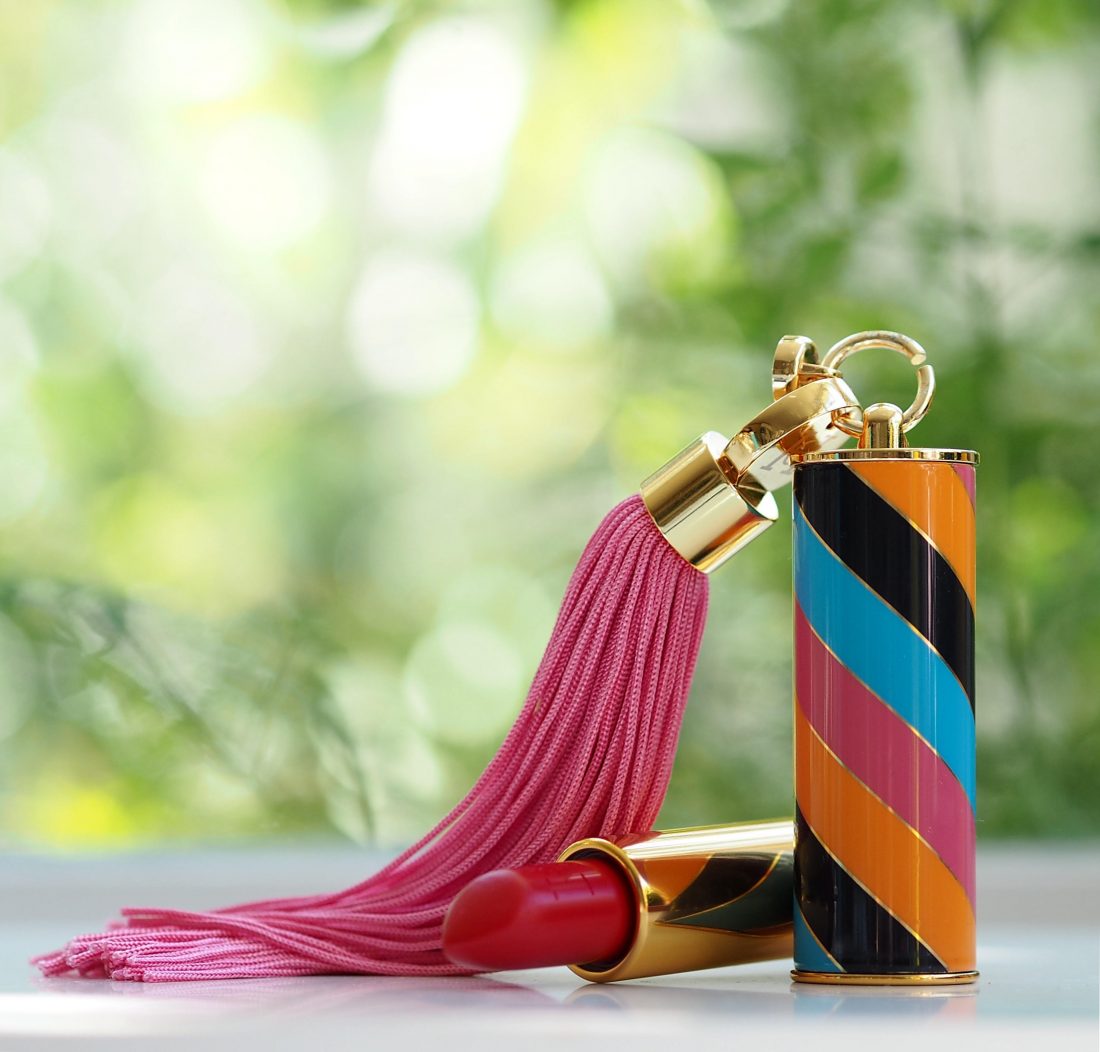 [unpaid/purchase/affiliate] I was about to order a replacement for my beloved Gucci Rene Balm Lipstick and got very side-tracked on the Harrods website by the new Carolina Herrera Lipsticks so ended up with one of those instead. I think the launch of these coincided with the country shutting down so they didn’t really get any attention and instead went into store without much fanfare. But, fanfare is needed because I’m so pleased with my purchase. Incidentally, Carolina Herrera is owned by Puig, who has recently bought Charlotte Tilbury.

It’s a customisable system – so you choose your case, your lipstick, your finish and any charms you might like to add (tassels, scarabs, flowers) to make it fun and more ‘yours’.

The charms aren’t as easy to fit as I’d hoped – in fact, retrospectively, I should have bought the linking ring but in any event, I had to get the pliers out which I wasn’t expecting. But worth the fiddle as I think this looks nothing short of splendid and needs nothing more but a couple of beetle charms on it (stop me!). SEE NB AT BOTTOM OF POST

The finish – sheer – is much stronger than my Gucci balm finish but the shade is near-ish so I’m happy (although I probably will get another Gucci because it’s almost down to a stub and I cannot remember using a lippie to its very end for many a year so we are fated to be together). The case is £17, the lipstick £25 (35g) and the tassel was £10 which brings it all round to £52. If you don’t want any fiddly bits, obviously, knock a tenner off that. By the way, I am noticing that brands are slowly knocking a few grams off their bullets – one or two here and there so if you think your new lippie looks a little shorter than it used to, it probably is.

The shade, Good Girl, is a kind of coral pink – a very summery, face brightening shade that feels silky on the lips and has given good, moistureful last.

So, they’re cousins, not sisters, colour wise – if I’d been at counter I might have chosen a closer shade if there was one but to be honest, I like it on myself and I’m pleased with it. You can find it HERE, non affiliate HERE. Actually, I’ve just panic-bought a new Rene Pink (£34) HERE because Harrods has run out and what if there’s a global shortage. 🙂

NB – So – apparently the tassels are supposed to attach magnetically to the bottom of the lipstick. I didn’t need the pliers after all (which I did think was a bit weird at the time) BUT it needs flagging more prominently I think because I literally had no idea there was a magnet at all. Much easier with the magnet and no pliers required…. unless you want your tassel on the top like mine (incorrectly) is. I haven’t got the energy to reshoot the pictures :-))