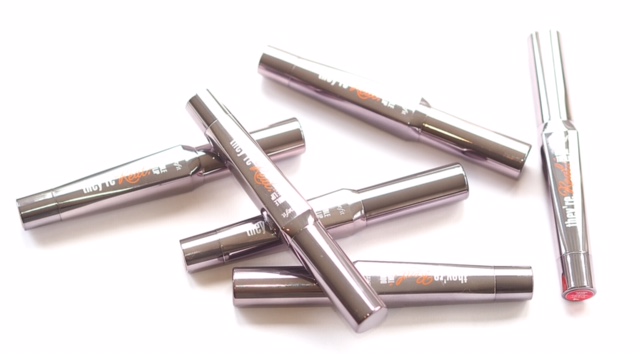 Some are very subtle and others are more obvious and then really, it’s up to you whether you want to do some additional blending for a graduated effect or stick with a more obvious line. To be honest, the obvious line thing is a bit 90’s for me but that said, there is no harm in bringing a trend round again, and it’s certainly been user improved by ensuring that colours are complimentary.

The effectiveness of Benefit They’re Real Double The Lip is very much affected by the condition of your lips – if they’re nicely smooth and hydrated, they’ll glide over, but if not, there will be some drag which isn’t what you want when you need precision. So, do lip prep first. Second tip is not to use these when they’re stone cold…. if they are warm (room temperature), they perform much, much better. I know this because I photographed these when they were literally only minutes from the courier’s bike and very cold. When I played around with them later, and they’d warmed, they performed better.

If you find the line too harsh (there is really only one shade where I found it doesn’t look quite right as it applies and that’s Criminally/Coral and possibly Juicy Berry) you can blend to more of a subtle ombre with a lip brush.

So, the swatch tells the story – some shades you see very little difference (this works really well on the red shade, Revved-Up Red because it’s something that really only you would notice but it does somehow up your lipstick game), and others it’s more obvious. I’ve shot these on a vivid setting to try and show the ombre properly, but in reality, they’re not quite so bright. From bottom to top: Fuschia Fever, Flame Game, Juicy Berry, Revved-Up Red, Nude Scandal, and Criminally Coral. There are a couple of other shades I believe, in shades of rose, but I don’t have those yet. Oh, and I should say, they look much better on the lip, with the darker pigment background, than they do in swatches.

I think I would advise visiting a counter before buying unless you’re really, really sure – they’re so pretty and impactful if you get the right one, but seeing them actually on the lip changes everything. Benefit They’re Real Double The Lip is £15.50 and they launch online on 14th January, although I believe they’re in some stores already.