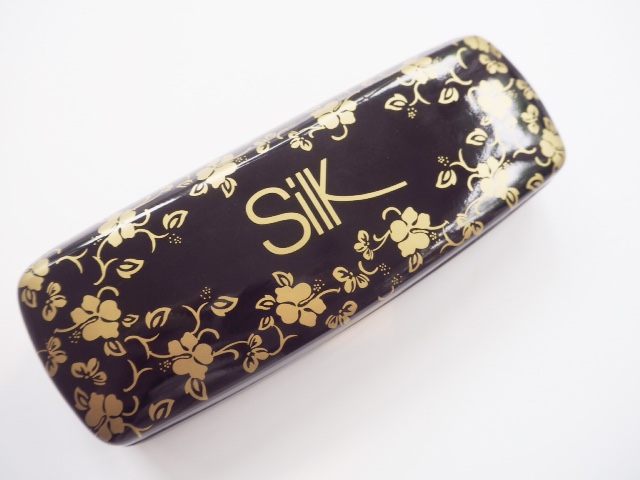 This is some very swanky packaging for the Argan Lash Mascara – I guess it’s based on a pen case, with each tube (the mascara and the fibre) being held in place by a loop within the box.

The tubes have a gold pattern over black which I think is really pretty – it looks and feels very premium. I’m just getting used to using mascara again after years of lash extensions and I’ve tried a few fibre mascaras so far. The last one (I’ve forgotten which) made my eyes feel gritty.

There is – as you’d guess by the name – organic cold pressed argan oil included in the mascara formula and although I was sceptical about that, after I’d applied the product, my lashes did stay soft rather than going rock hard. This is the only brand that I’ve come across that mentions that to apply the fibre aspect you should tip your head forward (to prevent fibre in the eyes)… I only read this after the event, but happy to say I didn’t have any fibre fall.

Argan Lash Mascara is transformational for lashes – mine looked absolutely huge; and rather than fat lashes, I got long, spiky ones, which is my preference, although there was a volume element. The difference between one eye (no mascara) and the Argan Lash eye was ridiculous!

However, if you’re hoping to achieve lashes like the ones in the included brochure – it’s not going to happen! The very nature of fibres means that they just can’t be so orderly – I tried brushing my lashes which obviously just pulls the fibres out although I would advise brushing your lashes before you apply just so they’re in perfect shape to receive the coats. It is an excellent fibre mascara that gives massive lashes, but I think the brand has let itself down with this image because it’s really not achievable.

Argan Fibre Lash Mascara is £29.99 – I think a lot of this is paying for the beautiful packaging rather than the product; but.. it’s a good fibre mascara (although I noticed later in the day my lashes had lost separation somewhat). So, bit of a mixed review, this one – yes, you’ll get deliciously long, soft and dark lashes, you won’t get them as tidy as in the picture and you can probably a good approximation of them without paying for the packaging by using a different product. On the plus, as far as gifting goes, I haven’t seen a mascara presentation as lovely as this, and I’d be thrilled if I got it as a gift. The chances, however, that those tubes would be returned to the case every time are about zero! You can find it HERE.