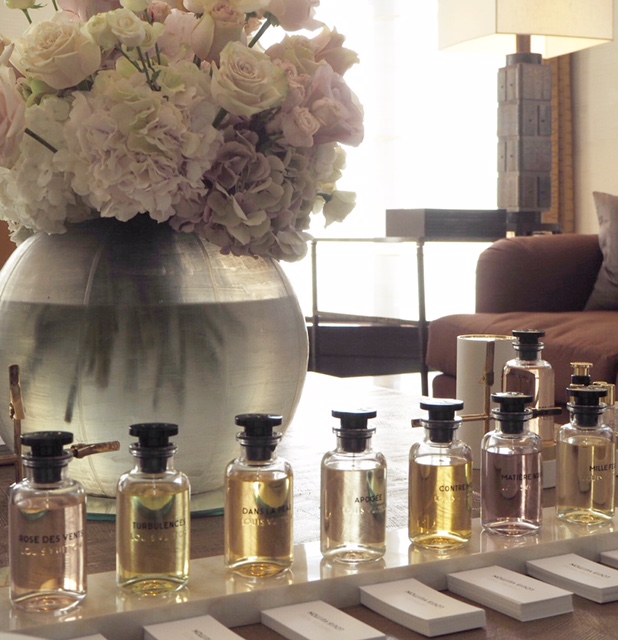 Some say that the launch of 7 fragrances from Louis Vuitton is an attempt to bolster sales with an entry point product; others (i.e. Louis Vuitton) say that fragrance has always been in the brand’s heritage. Which is true enough – back in the 1920’s, there were three Louis Vuitton perfumes. Excruciatingly, for fragrance historians and afficionados, there are no records kept of their smell. So, perhaps the Parfums de Louis Vuitton are a bit of both – a timely remastering of a long forgotten facet of the brand.

The roots of the brand lie in the old tradition of box making – afer a few years in Paris, Louis Vuitton (born in 1821) became personal box-maker to the wife of Napoleon III. Thereafter, Louis Vuitton trunks (made lighter and less cumbersome) became a travelling standard for the well to do. To this day, they are still made by hand.

The perfumer charged with creating fragrance for Louis Vuitton is Jacques Cavallier Beletrud, a native of Grasse. The collection is set nominally around travel which is rather irrelevant if you are only buying one, and if you are dying to try, I’d suggest that you buy the miniature set with one of each because that does make for a fragrance flight and keeps hold of the journey concept. It’s the thing I came away coveting most. There is a common thread – I’m no fragrance expert but I felt I could tell that each one was conceived by the same person –  no matter the composition, they all have a feel of air. There isn’t one that drags you down with weight.

I’ll go top line only on descriptions because from that you will get the gist and no words can really do them justice.

The one I preferred most is Rose Des Vents: silky, airy and light with Centifolia roses, Turkish rose essence and Bulgarian rose plus a dash of cedar and iris.

Next (in the journey), comes Turbulances. This is dominated by tuberose, but not as I’ve smelled it before. It’s got a heavy drop of jasmine sambac and Chinese magnolia, followed by rose and leather.

Dans La Peau actually has an infusion of leather from the Louis Vuitton workshops, with pure jasmine and jasmine sambac, but this time with down notes of musks. Dans La Peau also uses Chinese Magnolia. It has a powdery element. See how the compositions are beginning to connect?

Apogee is lily of the valley with the big floral notes rounded off by guaiac wood and sandalwood. Despite also using Grasse jasmine and magnolia, May rose is added. While this sounds heavy and floral, it’s somehow the greenest of the fragrances.

Of course there has to be a gourmande, and in this case, it’s Contre Moi. Vanilla, orange blossom and bitter cocoa wrapped with rose centifolia and pear liqueur. It reminded me straight away of macarons a little short on sugar and a million miles away from high street gourmandes.

Matiere Noir is the darkest fragrance in the set of seven. Patchouli, Loos agarwood, blackcurrant, white narcissus and sambac jasmine have a whisp of incense – but it still manages to keep a dewy accent.

Finally, I expected to love Mille Feux because the idea of it is raspberries and leather. I got a lot of leather but not enough raspberries! Inspired by a vibrant pink Louis Vuitton bag (maybe), there’s an animalic twist accompanying saffron and apricot. It’s described so, “raspberry and eather fuse like lovers entwined”. Let’s just say I feel a messy break up coming on.

Even I can tell that the Louis Vuitton Fragrances are exceptional – and different. We all know that many brands include notes that they know will have mass appeal to up the sales (interestingly, mass fragrance is not doing so well generally in the beauty arena, although niche fragrances are) but that hasn’t happened. Vanilla that could have been cloying is smooth and soothing, rose that is so over-used at the moment has been made lighter and more sparkly (thanks to a CO2 extraction method) and the woods are velvety and lush. The collection is an exercise in paring back while maintaining individuality and unconventionality.

I’d really love to know what you think if you get the chance to experience them. I had very mixed feelings about reviewing these at all because they’re £180 each (the small collector’s set is £230) and they could easily have been (sorry to say) money for old rope. But they’re not – they’re beautiful. As a small side note, the attention to detail is sublime – magnetic click lids, for example, and an atomiser straw that’s completely invisible within the liquid, only showing itself as you use up the fragrance. You can find the Louis Vuitton Fragrances HERE or in Louis Vuitton stores (dangerous just to step inside – I nearly left with a £175 key ring I didn’t need).