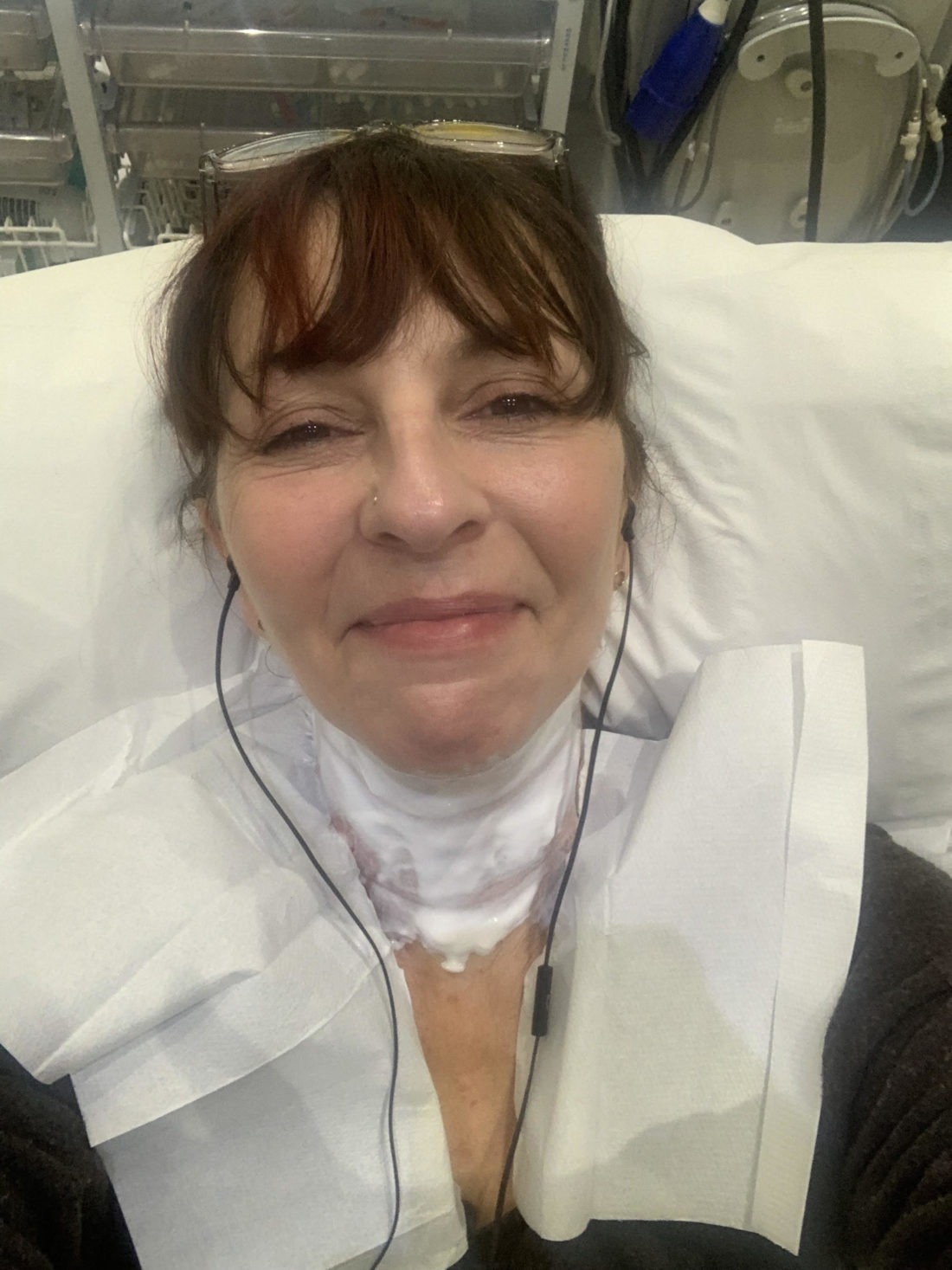 [unpaid/treatment/ad] What a stressful day yesterday was! Through nobody’s fault, my timings to go back to The Cosmetic Skin Clinic HERE to try Morpheus 8 got muddled and I ended up having to run to catch a train and then leg it up Oxford Street which had inconveniently closed for buses. From there I walk-ran to the clinic in Devonshire Place and arrived in a sweat but bang on time for 11.30 – a full three hours earlier than planned.

Morpheus 8 is a combination of radio frequency and micro-needling and I’d been curious about trying it since losing some weight over Christmas and realising that if it does give the claimed results, I would be a good candidate to see them. The skin on my neck has become looser and while that’s okay in itself the unexpected side-effects are itching between the folds. I mean, who knew? I suppose that its exacerbated by me constantly looking down to my phone because that seems to be the action that’s the most irritating. So, after assessment at the clinic it was agreed that there would be something to look at afterwards. A few weeks later, and having had time to think about it more, I went ahead.

Let me say that this is what I would call more of a procedure than a treatment. You need at least and hour and 15 minutes with a whole tube of numbing cream on your neck before anything happens and that has its own comedy element I must admit. I didn’t think through using headphones and somehow dragged one of them through the cream and up my face without noticing leaving me with a nicely numbed stripe. It’s hard not to touch but you can’t otherwise you’ll end up with numb fingers as well.

After the time has passed the practitioner, Lee, scraped off the cream with a spatula and started the treatment. I haven’t had a caesarean but I could relate the description that you can feel the rummaging but there is no pain. It’s a very weird sensation and I didn’t like it really. There were certain parts of my neck that were a bit more sensitive – when I say a bit, I mean they really hurt, but very fleetingly… before the swearword that came out of my mouth was finished is how briefly and it was a short one.

The equipment comprises a hand-held ‘zapper’ that Lee pressed with some force against my skin repeatedly to allow a dose of both micro-needles and radio frequency. The absolute mercy of this is that he is like greased lightening in speed so it was all over relatively quickly – about fifteen minutes. I did both before and after videos on Instagram HERE if you want to take a look.

I didn’t find it terribly nice at the time, my neck stung like heck afterwards for about half an hour, and I ended up with a headache from tensing up (Morpheus 8 is a walk in the park compared to Ultherapy which is the worst thing I’ve ever tried in this vein). Having hundreds of tiny needles bounced into your face does the miraculous thing of genuinely stimulating collagen via the healing response needed and radio frequency sort of shrinks the loose skin.

There’s not really any major downtime – I was shopping twenty minutes after but I did feel really thirsty and in urgent need of sugar (thank you Crème Egg!) and my neck will be red for the next 24 hours. There is some home maintenance aftercare to be done –  use an antiseptic product on the area for a couple of days, use only tepid water when washing for the next week, SPF after the micro holes have closed, avoid using make up for a few days (not a problem because I don’t use any on my neck) and don’t use retinol (I was given a couple of after care products to use – Epionce Priming Oil and Epionce Enriched Firming Mask (for moisture). I think I’m going to have to clingfilm my neck when it comes to hair washing.

Anyway, that is the long and short of what Morpheus 8 feels like – I have another appointment in 6 weeks and of course will do an update of any result. I hope so – it feels like quite a big experience for no gain so I’d be disappointed to see nothing. But then, I saw nothing with Ultherapy and that was awful so I just have to wait!

*For absolute clarity, the Morpheus 8 treatment was offered to me by The Cosmetic Skin Clinic HERE who I like and trust after having had Coolsculpt there last year and interviewing Dr Tracey Mountford, the clinic director. They did not pay me to have the treatment and I did not charge them for writing about it. We have an open communication and they are happy for me to be as frank as I need to when explaining what a treatment feels like and how I perceive the results.