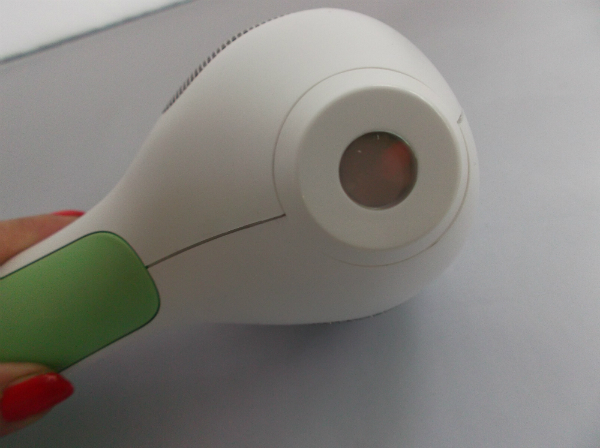 It’s a couple of years since I last tried the Tria system for home laser hair removal, and now I’m reviewing the shiny, new version, the 4X. I think the very word ‘laser’ is intimidating for some, particularly if you’ve never tried any kind of laser treatment.

So, I’ve made it look a bit friendlier! Less alien. Because this new version IS much friendlier than the old version.

For a start, the older version had a tiny wait time between ‘flashing’ the laser which really slowed things up – if you’re doing a larger area such as upper leg then that really matters. With the 4X, there is no wait so you literally just zip along, zapping away until you’ve done the area you want to treat.

There are five settings to set the intensity (to be honest, I’m pretty sure everyone will go straight to five so they really might as well have only one or two). I set mine to five – the strongest – and it was perfectly tolerable. As the laser flashes you get a little wave of heat that doesn’t even go to a sting.. it’s really very gentle, considering. You can actually track the number of pulses you use in any one go, but I didn’t do that – it just seemed a little confusing, somehow.

This is the laser window, so you can see that large areas are going to take a while – it’s a small window. But, for underarms or bikini, it’s a piece of cake. I imagine an underarm would take ten minutes maximum, while you’d expect a whole leg to take the best part of an hour I think.  If you wonder how this can work, I’m no scientist, but basically, diode laser light beams penetrate the skin to the follicles. The laser targets the hair pigment (it absorbs the heat) and disrupts the follicle to the point that it stops re-growth.

It’s a serious outlay at £345 but you the fact that you can use it on face and body is such a plus that I’d say that its a very serious competitor to salon treatments both on efficiency and money. Home lasering does work.. I’ve seen some spectacular results, but you must be dedicated in treating the areas properly and over the suggested time scale. Tria say that you’ll start to see results after two sessions at two-weekly intervals, so within a month (Tria say that 70% less hair grows back after two treatments).

The only thing I’m not so convinced of is the gel that you use between the skin and the laser – the Tria Gel Moisturiser is £25 and given that this new model is really quick and efficient I am not sure that you really, truly need one at all. To be safe though, I’d recommend you use it as instructed (I didn’t use mine!).

The site is HERE and features a skin shade chart that you must complete to see if you are suitable – it’s not suitable for very dark skin or very light hair. Or, you can buy from HERE.