Things I Couldn’t Throw Away 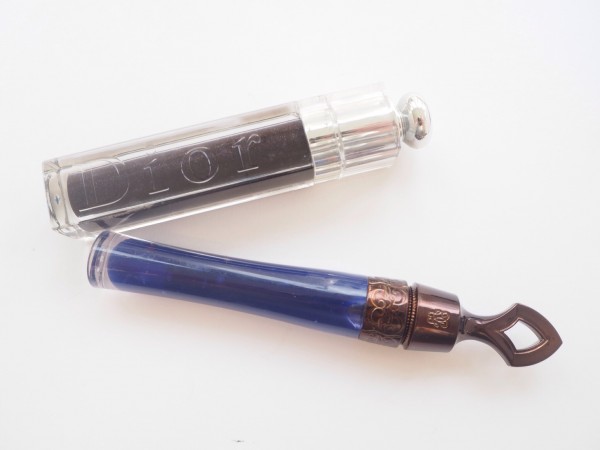 I’ve recently had a brutal cull of my make-up drawer. I know I’m in the very lucky position of having lots of make up to test and try out but despite the fact that only a fraction goes into the drawer (yes, I’ve commandeered a whole kitchen drawer for it, much to Mr BBB’s horror) it’s still piled high. So, I bit the bullet and decided to let old products, kept for sentiment rather than use, go no matter how fond I am of them. But I just couldn’t let these two go! The blue gloss is from the Guerlain Pucci Terra Azzura collection (has that summer collection ever been beaten? NO!) and the other is Dior Addict Ultra Gloss Flash in Black Lame from around about 2013 I think.

The Dior gloss is shimmer shot and while it isn’t a dense black, it does kind of grey-wash the lips. If you put it over red or pink it transforms the colour to a vampy hue without losing the backdrop of the original shade. The same really for the Guerlain gloss – it’s a highly translucent blue so just does a little shade adjustment on whatever you’re wearing underneath. Although I totally bought the concept at the time, I’m now thinking that maybe a blue lip after a certain age might produce an ambulance, not admiring glances.

Either way, I love both of these for just walking on the edge, rather than being the edge. And I’ll probably still have them in five year’s time. Do you have any ‘past it’ products that you just cannot let go?