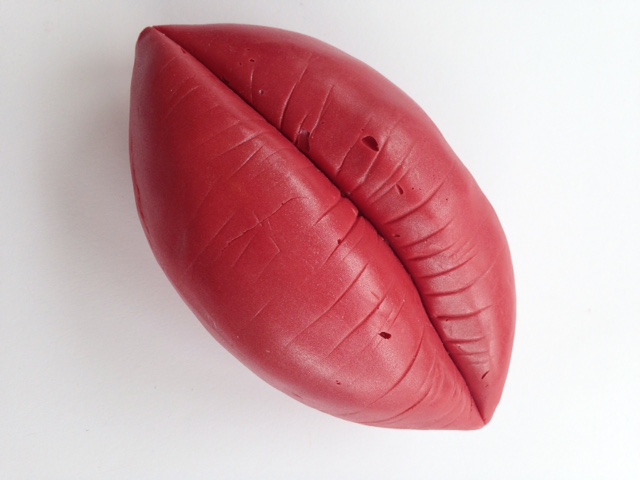 So, this arrived. A mahoosive pair of strawberry chocolate lips. I’m telling you – every day is an adventure this week! When I picked them up, they rattled a bit, indicating there was something inside, so I had to take a knife to them.

Not quite so pretty now – in fact, someone call Hammer House of Horror; there’s a new film that needs making. But inside, as well as more sugary treats, was Soap & Glory Pillow Plump, or, official title, Sexy Mother Pucker Pillow Plump. Soap & Glory has a history of made-up names for ingredient, so this one features ‘Lipswell’ (I’m sorry, but *eye roll*). But, if you want plumped up lips, let me tell you, you will 100% get them with this!

I had a bit of a ‘bluddeee-hell’ moment with this because after a few seconds your lips start to tingle and that tingle amplifies to such an extent over at least fifteen to twenty minutes that there’s nothing more to say than bluddeee-hell. It’s good! My lips definitely felt plumper – the drop down from what I can only describe as extreme tingle makes your lips feel like they’re coming round from a dental injection – a tiny bit numb – but it soon passes.

Soap & Glory Pillow Plump is already out in the US but launches in March in the UK for £10.

I’d say that the effect won’t last you hours, and god help you if you kiss anyone while you’re wearing it – but Soap & Glory Pillow Plump is an absolutely wow product for doing exactly what it says it will. In fact, everyone should try it and we can rename it the bluddee-hell gloss.