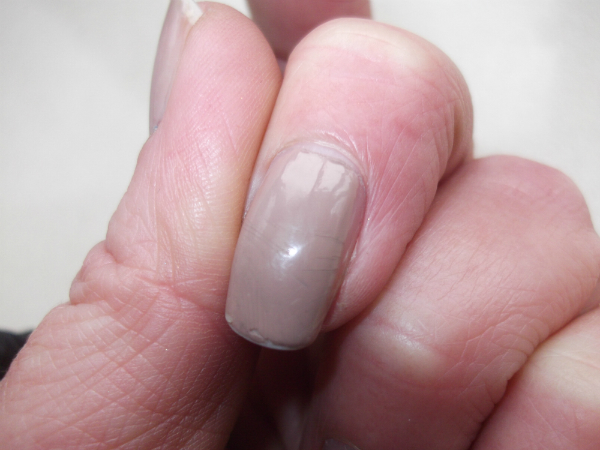 You’ll have to excuse the chips on my mani (it’s on its sixth day, which I think is pretty good) but in order to  show that the top coat cracking is actually real, I couldn’t tidy it up.

I actually initially blamed this cracking on Kure Bazaar (I’m sorry, KB!!) but it was flagged up to me on Twitter that several people on the Nails Inc Facebook page have complained that it cracks. And it does.. you can see some dark looking lines going across the nail; I haven’t seen anything like it before.

So, while I gave the Kensington Caviar Gel Effect Plumping Top Coat a BBB Recommends Award, I’m afraid I have to take it back because it’s not acceptable for a £12 top coat to behave this way. Looking around on the internet to see if other polishes behave this way, it seems that it’s an unusual thing – often people talk about cracking but mean that it peels or chips, doesn’t actually crack on the nail.

I’ve asked several nail experts why it could be that it cracks like this – the universal answer seems to be a blip in the formulation (you need to put a lot of effort into a formula like this, and it appears that it’s maybe not enough this time), but coating it thinner might prevent it from happening.

PS: from comments on Twitter and on here, the gel-ish top coats seem to be a problem in general.. which makes me think that if the original product is private labelled, then it is entirely possible that it is all exactly the same formula from exactly the same supplier (i.e. they are all buying the formula from the same place and re-labelling as their own).