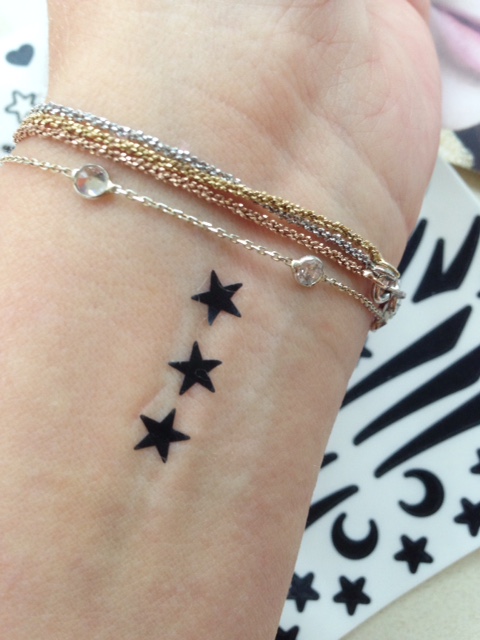 I’ve followed Mily Make Up since it’s inception – oh, several years ago – when it started out with stick on beauty spots. Since then, a whole new array of eye adornments have followed, including Eye Flashes – spiky stick ons for the lids. These are a creative step on from stick-on eye liners which are very popular in Asia although personally, I’ve never really got them to look as impressive as regular liner.

The new sets from Mily Make Up are a mix of several of her designs in one sheet – I think, to be honest, they’re pretty expensive at 21 Euros but unlike tattoos, they just peel off. All the designs look rounded on the sheet but they’re not like that once you take them off the paper base.

They’re much sharper and translate to a matte black. Personally, I can’t do them on my eyes without feeling all kinds of self conscious so I’ve been wearing them on my wrists instead, which I really like – they’re kind of unexpected and that’s always good. If you’re wearing them as beauty spots, then anywhere will do, and they have the distinct advantage of not smudging.

It’s well worth looking at the website if you haven’t seen it before – there are some very creative looks going on, particularly with the coloured eye flashes. Mily Make Up is HERE.