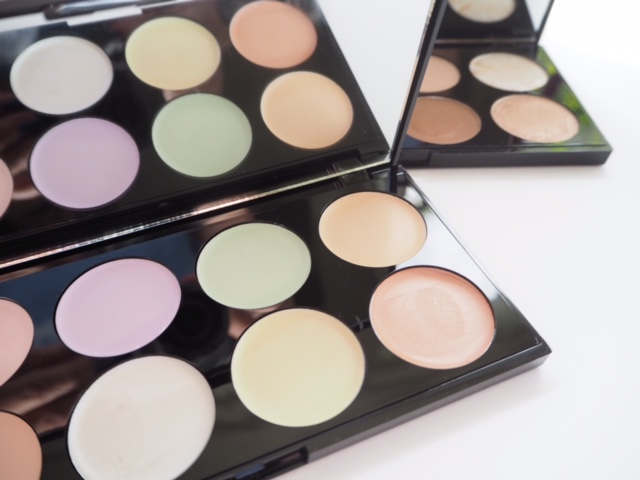 Actually, MUR has two new palettes launching today – the Makeup Revolution Ultra Professional Contour Palette and the Ultra Professional Corrector Palette. The first thing I noticed in swatching with the Contour Palette is that the textures are very soft and creamy – almost a powder creme hybrid. I’m not any kind of contour fan, but there’s a big difference between this palette and other ‘powder’ palettes in terms of blendability and texture. Even if you’ve never contoured, I think this is the best possible place to start.

The last two pans are shimmery – massively so in the case of the white gold so if you like that burnished, polishy look to skin, it’s easily done with these. The second is more golden – both are sheer, sheer shimmers – no chunks of glitter.

A quick swatch gives you an idea of the depth of shades, with lights and deeper, more bronzed tones. It’s £8 HERE.

I have to confess that I did get a bit geeky about the Makeup Revolution Ultra Base Corrector Palette – every tone in one palette that you might need to get geeky yourself about tone and base perfecting! I’m curious to try this out actually (so far, I’ve only had time to do arm swatches) but I wish it had come with instructions of some sort to indicate which shade counteracts dark circles or redness, for example. In theory I know, but when you’re presented with a choice of eight, suddenly, it’s not as clear cut as I thought! As a rough guide, though, here’s what does what!

Texture wise, everything is smooth and creamy although be careful not to be too enthusiastic – you will only need a tiny amount and then build from there rather than try the hopeless task of adding a lot and taking it away again. It’s £6 HERE.