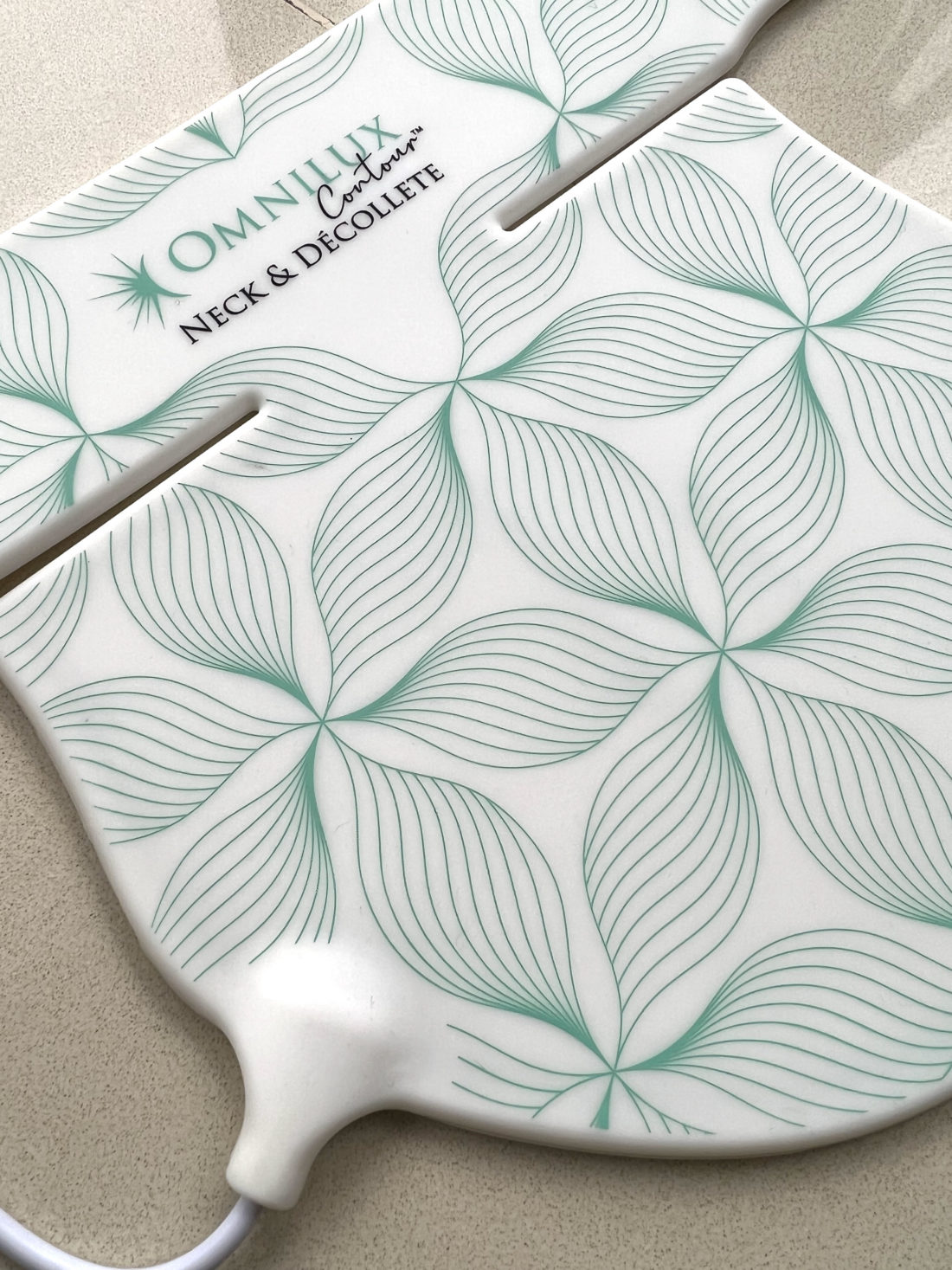 [unpaid/sample] Does anyone know what day it is? This ‘twixt’ time is just so confusing. I hope everyone has had a happy and/or peaceful time over Christmas. I should start this review by saying that I have no direct conclusions about the Omnilux Contour Neck & Decollette LED Mask yet – but that I am quite impressed with it. I started using it daily about a month before Christmas but as is the case with, and the downfall of many gadgets, totally forgot one evening and then forgot relentlessly until now. We have had many discussions about necks on this site – I would say that so far, mine has been my most challenging ageing to ‘get used to’ – and I get the impression that it is the same for many of us. The funny thing is, I never notice anyone else’s neck – only my own – and I’m not sure anyone else does either so there must be some sort of cancelling out there… but at least I am in prime position to see if anything actually does make any inroads to smoothing. I was more interested in this for reducing sun damage – my chest is a prime example and while I am accepting of pigmentation, it’s an opportunity to see whether the Omnilux puts its money where its mouth is. All the gadgets talk a good game – Omnilux is no different. But, it’s not at all complicated to use, takes ten minutes while you’re lying down and I have actually felt, in the time that I was on the ball and using it daily, that it was making a slight difference just in terms of skin perkiness and pigmentation marks. I think I could accurately say that I was diligent for about three weeks and I’ve just started it up again so I don’t expect, second time around, to see results for about that time again. I am kicking myself because I could easily be at the two month stage by now and as it is I am starting over. But, I saw enough to know that I want to start over. Omniluxe and the many similar LED masks use a three-pronged approach with light – red light reduces inflammation and pigmentation, near-infrared targets deeper cells for collagen and elastin stimulation and blue neutralizes bacteria that cause redness and inflammation (in acne). I’ve read through the specs for the Omniluxe (102 LEDs (54 red and 54 infrared) encased in 54 bulbs. 105mW/cm2) to try and run a comparison against the Current Body Neck & Dec Perfector but without the specs available on line, it’s quite hard to tell whether they are exactly the same. Let’s just say that reviews on that one are more variable than on Omnilux. 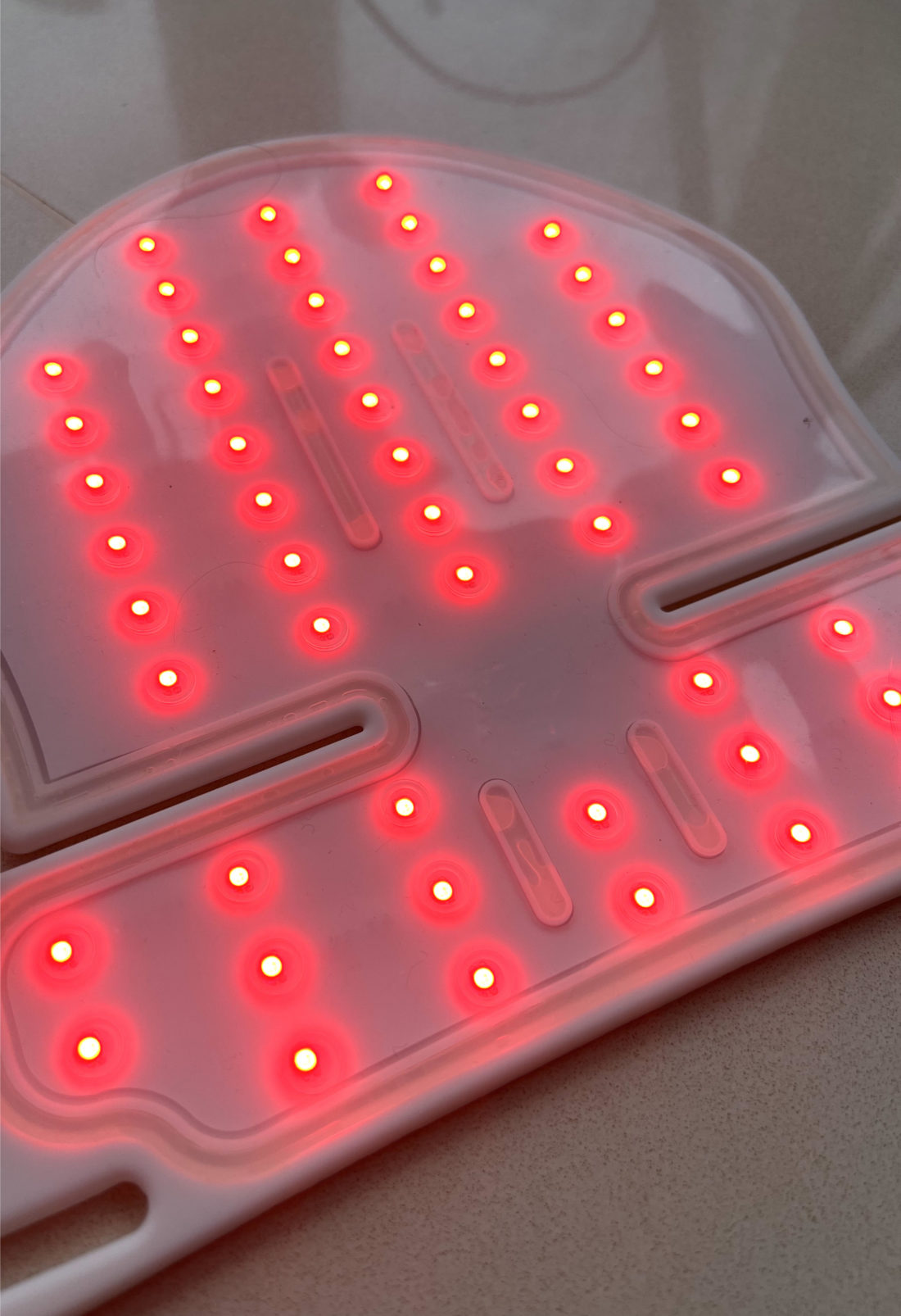 One of the things that Omnilux warns against is using prescription levels of Retin A (Tretinoin) at the same time (please do read all contra-indications) – I’m actually using Skinician 0.1% Powerbalm (£52 HERE) at the moment (prior ad relationship to be clear) and I am super-impressed with it. My skin feels freshly exfoliated and smooth without feeling in the least bit dry. I’m also using a lab sample of a new serum coming up from one of my favourite brands so all in all, I’m having a very good skin time! It’s absolutely not my job to talk you into an LED device – I’m saying I think it’s worth considering if a) you love gadgets, b) you have realistic expectations, and c) you’re someone who would go to a salon for LED or similar treatments. There’s nothing to stop you multi-tasking this device on your hands as well although it would be a stretch to say you could use it on your face (you sort of could – one side then the other but oh, the faff). It’s expensive at £299 HERE and a considered purchase.