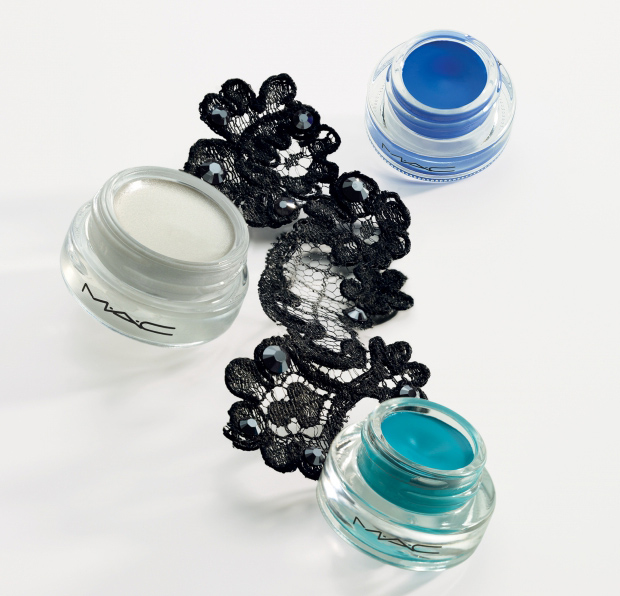 The MAC Philip Treacy collection is a tiny one by MAC standards with 12 products in total. The collection is inspired by three of Treacy’s most famous hats; one metallic (and art-deco in style which you will see reflected in the High-Light Powder), one colour driven (hence the super-bright lipsticks) and a Gothic, lace laden headpiece.  It’s interesting really, because this is one collection that I feel has been pared too far back when in fact, Philip Treacy’s hats are challenging and flamboyant and it would have been more exciting to introduce a new formula or something we really haven’t seen before from MAC. It’s a bit too safe for its inspiration I think – for a collaboration with a man who pushed headwear to boundaries not thought possible, I think we needed some pazazz!  I also think that maybe it would have been nice to bring back Blow lipstick – Isabella Blow was one of Philip Treacy’s first supporters and such an important part of his path to success so it’s a shame she isn’t represented at all.

The stand out piece from the range is the High-Light Powder (£23) in either Nude Pink or Blush Pink – Nude (shown) has a champagne base, while Blush has a light pink base. Both have a silver over-spray on the pattern. There are three Fluidlines (£15.50) – Blacktrack (existing), Royal Wink (as shown) and Blue Peep, a flat teal shade, both limited.

Swatched above are No Faux Pas (pink) and Cardinal – the usual high pigment formula and super-bright on the lip!

Either of these shades make a great eye base for smoky eyes but I could easily wear Genuine Treasure on its own.

As well as the above, included in the collection is False Lashes Extreme Black mascara and a Face Brush (both existing).

The question I get asked the most about MAC collections is where they’re available, so I’m going to copy straight from the info I have here: