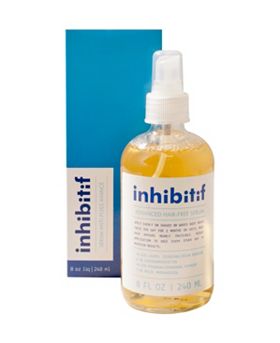 Unless you’ve been hiding under a rock recently you can’t have failed to have come across advertising for this product – it’s pretty much everywhere. It’s a while since I’ve seen a single product (other than fragrance) so extensively promoted.

Inhibitif basically reduces the density and prominence of hair you produce – i.e. your hair becomes finer and finer until it’s invisible. Now, I haven’t used this – I can totally see what’s behind the incredibly carefully worded campaign.. they’re not saying it gets rid of hair but are putting this up against laser. It’s not a depilatory but bottom line means you have to use hair removal methods less often.

Initially sceptical, it’s Boots that have launched this product exclusively and I know the procedure at Boots – research and proven results and as I say, there is so much money being poured into the campaign that I can only think that there is truly something in this. The fact that it claims to reduce in-growns as well is an absolute plus.. I get them and hate them. I definitely will be trying it.