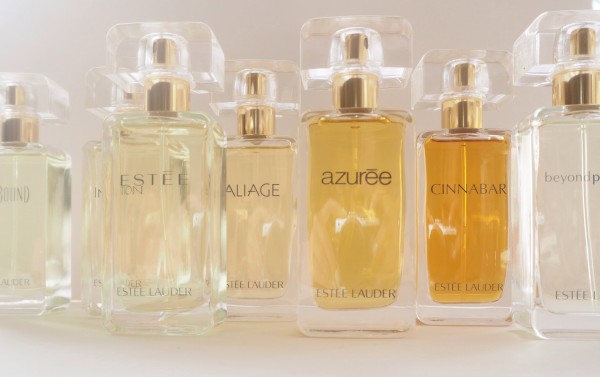 Given that Estee Lauder’s empire has it’s roots in fragrance with the release of Youth Dew in 1953, it seems natural that the fragrance offering is getting its own heritage focus. Although Estee began her beauty career with creams, it was not unusual for her to make her own blends of fragrance, and what’s interesting is that there is a purpose to each of the House of Estee Lauder Parfums. I’m disappointed that my favourite ever EL fragrance – Private Collection – doesn’t feature in the revamp – but it’s early days… maybe it’s on its way.

As an overview, because this is an existing product revamp, there are eight of the classic Estee Fragrances under the new House of Estee Lauder Parfums. I’ll run through the inspiration and ‘purpose’ behind each one, and I’m guessing that everyone over a certain age has had an Estee fragrance at one time or another. I think these are real memory-stirrers, just housed better than they were before.

Estee: A warm floral – the kind of ultra-feminine fragrance that hasn’t been downwashed with vanilla so it’s still sparkling and fresh, and inspired by lightful crystal chandeliers. I love that the inspiration is not only crystal chandeliers, but the reflection of them in a glass of champagne. You go, Estee!

Azuree: Although ‘sun’ inspired fragrances are common now, Azuree was made in 1969 to capture the French Riviera and warm, Mediterranean sun. If you loved the Riviera before the tourists found it, you might want to try a spritz of the citrus and wood laden Azuree.

Aliage: I’ve seen Aliage described as ‘head-clearing’ which I am sure wasn’t the original intention, but what’s interesting about this chypre fragrance is that it was a fore-runner to what we now know as ‘sports’ fragrances. It’s not for everyone but if you like a weighty dose of citrus with a spicy, nutmeg infused backdrop, then give it a try.

Cinnibar: Personally, no, no and a million more no’s!  However, if you crave for an 80’s style oriental that envelopes with amplified spice and flowers, then, okay.. but don’t say you weren’t warned ;-). Cinnibar is apparently responsible for the trend for oriental scents.

Spellbound: Formulated to capture the feeling of falling in love, this is just a lovely, romantic scent that has a little of the oriental to it that’s thankfully overtaken by a burst of fruit and flowers.

Tuscany Per Donna: This is one of the few Estee Fragrances that I have never experienced before – as the name suggests it’s warm and light but surprisingly with an oriental twist. Actually, it’s herb driven but like all Estee Lauder fragrance, there’s a big bunch of flowers in there too, followed by amber and vanilla.

Intuition: I remember the advertising for this – it was released in 2000 – and it’s described as a lumious oriental. What is it with all these orientals? However, what’s lovely about Intuition, created to be unashamedly feminine, is that it has that ‘skin scent’ thing, so it doesn’t side separately from the wearer but instead melds perfectly.

Beyond Paradise: Designed to do that ‘tropical island fantasy’ thing that we all have when we’re lying in the bath on a cold London day, I like this best of all the House of Estee Lauder Parfums so far. It’s floral with notes of honeysuckle, plum blossoms and orange flower. Can’t think of anything more likely to cheer up a gloomy day.

All of the fragrances are highly floral, despite their categories, and compared with modern fragrances, I think you might say they’re old-fashioned. But, there are no challenges to these scents – they’re built for women to wear rather than to showcase a particular nose’s talents or to be brand indulgent. I think that Estee Lauder is trying hard to bring back Estee herself into the brand – she’s at the heart of it, after all – and this is their first tranch of ‘heritage’. Sometimes, you can’t go back but when I look at the Estee Lauder brand as a whole, it seems right that despite advanced formulas, trend led make-up and fashion collaborations, there is still a place for the lady who began it all.

House of Estee Lauder Parfums launches this month – fragrances are £48 and £50 depending – and you can find them nationwide.