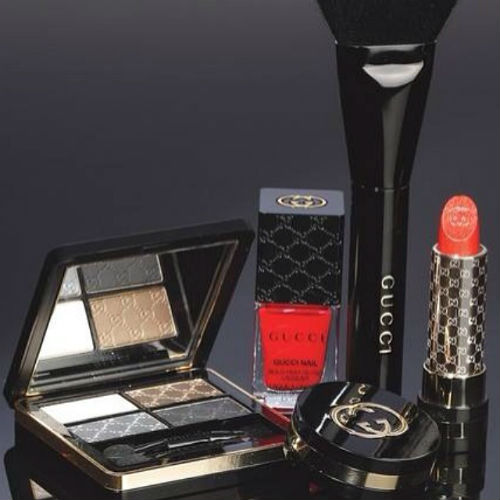 I posted this picture of Gucci beauty up on Instagram a few days ago and the response was very mixed, much to my surprise. I think it looks rather sleek and I love the embossing on the shadows, but others thought it was a bit 80’s looking – some even said it looks tacky.

Without knowing more about it (and P&G are being super secretive, dishing out snippets as and when and to be honest, I really can’t ask any more times for information than I have – same with Louboutin.. blogs are last again, but I think they’d be rather sorry if bloggers didn’t jump to rave about it when they’re ready for us) it’s really hard to assess the quality. I know this popped up on WWD.com and I’ve cancelled my very expensive subscription to that because it’s rare they have any really exciting news any more, but I do know that they’ve said that it’s based on legendary style icons (eg: Jane Birkin and Lauren Hutton). That’s been so done before so I’m hoping there will be something extra.

If you look at brands like Givenchy and Dior – they’re bringing their beauty closer to the fashion brand, whereas Gucci seems rather removed from it if it’s just based on classic style icons. Givenchy have moved to the Riccardo Tisci aesthetic of fashion which is why it’s all rather rock chic and gothic in studs and black leather – a direct reflection of Tisci’s creative directorship.

P&G also own Dolce & Gabbana beauty where the quality is very good – but again, doesn’t really follow any cohesive direction regarding its fashion arm. I imagine, given than they’re both from the same hold, that the quality will be as good as D&G. They’re also both under the creative arm of Pat McGrath, who is just a legend in beauty, so, you know, there are some very good pointers that Gucci Beauty will be lovely, if safe.