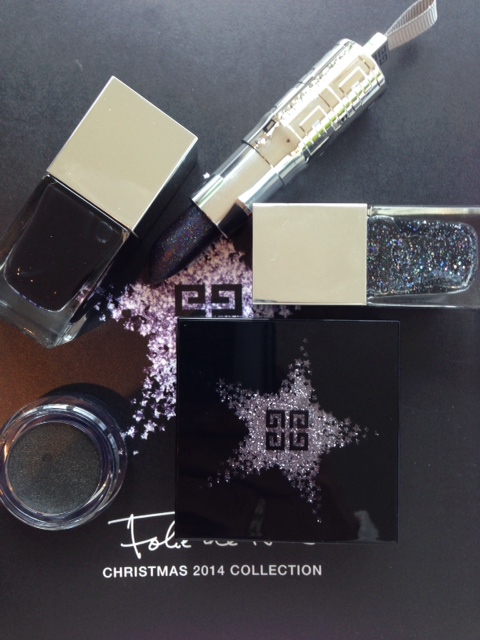 I love it when the Christmas collections start rolling in – they’re always so full of glamour. Givenchy Christmas 2014 Folie de Noirs is no different – as a collection, it’s dark and deep but twinkling with glitter and shimmer. I think the eye palette is their best ever.

Eight metallic tones are split into gentle washes and pigment packed sheens – there isn’t one shade here I don’t like and it’s a highly versatile palette if you love a dark eye.

I’ve just used one swipe finger swatches as ever so you can see how the pigment looks on first try. With a brush (included in the palette) you’ll be able to blend them out, but this is such a beautiful selection. I’m so happy to have it.

A new Ombre Couture (I’m already a big fan of the Ombre Coutures – creme blends that do not move from the lid) called Noir Sequin. It’s a deep wash of black offset with iridescent glimmer.

Nails are along the same deep, dramatic, twinkling theme – Noir Satin is a new shade that’s staying, but Folie Scintillante is a limited edition. It’s majorly light catching and set in a transparent grey base coat so you can wear it over pretty much any colour (red, maybe) and it will take the tone down by one or maybe two shades.

Rouge Revelatuer Prune Folie  is the surprise! It looks so dark in the bullet but comes out as a greyed pink shade, so again it’s great for a top wash of shimmer over other colours. There is also a gloss which is one of the sparkliest that I’ve ever, ever seen, but I don’t have it yet.

The Givenchy Christmas 2014 Folie de Noirs is such a cool range – dramatic black but super-pretty, too.