Do You Need A Beauty Coach? 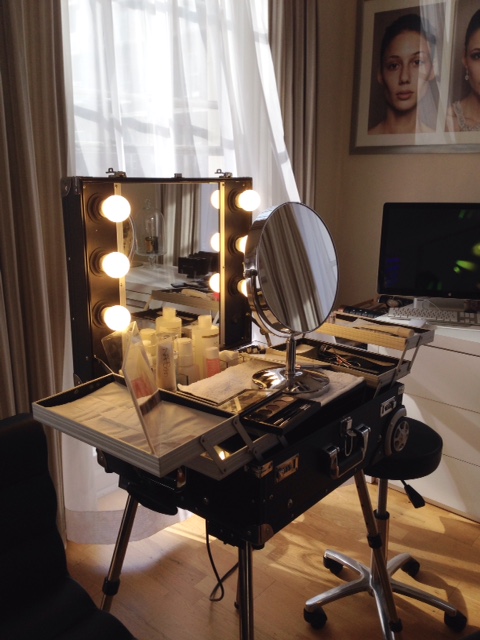 I know exactly what I like so when I was offered a make-up lesson with make-up artist and beauty coach, Lina Cameron, I’ve got to say I didn’t quite see the point. However, she’s been recommended to me so many times and works closely with Bourjois, a brand I use a lot of, so we spent an hour together at her London based studio.

To say that was an hour well spent is an understatement. One of Lina’s passions is working with older women and her approach is one of complete positivity. She doesn’t have ‘rules’ as such, but she maintains that with an eyeliner, a curling mascara and exactly the right shade eye-shadow, everything changes! For example, don’t shy away from black eyeliner – being able to nudge your liner into the lash line rather than just above the lashes makes a world of difference. I know that trick already and for me, it’s easier to use a flat edged brush and some Bourjois Little Round Pot Intense Eye Shadow (£6.99 HERE) and smudge it into the lash-line – so that you’re almost filling in between the hairs. But it makes a world of difference in defining the eyes. On my eyes she used a neutral shade from MAC – Groundwork – in the Pro Longwear Paint Pot (Paint Pots are £15.50 HERE) series which is beautifully creamy and doesn’t sit in any creases. It’s such a perfect shade for me that I don’t want to be another day without it! On my inner rims, where I use tons of black kohl, she used a brown shade – lighter than I would have gone, but it was exactly right for a ‘me-but-better’ look.

Make-up aside, Lina taught me to use Chanel Le Blanc De Chanel Multi-Use Illuminating Base (£33 HERE) properly. Who knew there was a particular art to it? No wonder I could never really understand the hype. In case you’re wondering, you squeeze some into the palm of your hand, work it into the palm, then apply by tapping. It somehow becomes a bit thicker after working it in and it left my skin gleaming!

I wondered about the type of clients Lina coaches? “Some women have just never learned to do make-up – it’s passed them by somehow and they want some basic tips, while others know their time-worn routine very well but now want to update their look.” Quite. The make-up routine you became comfortable with and adept at doing ten or twenty years ago won’t necessarily have grown with you. It might be time to experiment with updates.

There’s somehow a complete freedom with putting your looks in someone else’s hands. It’s a luxury that few of us think to have and it’s far beyond a quick red lip lesson at a make-up counter. I was so impressed that Lina picked up exactly what I needed straight away – and knew the best way to bring out the contours of my face. I’m in the habit of adding blush to my cheek apples – Lina says that this ‘sinks’ the face, whereas adding colour under the cheek bone, always heading upwards along the bone line (towards the ear but not that far) will give more definition. She’s so right! I’m not going to forget her ‘scoopy scoopy’ advice (making a scooping ice-cream movement with your blush brush).

A lesson with a beauty coach isn’t the same as being made-up by a make-up artist; it’s much tailored and personal. You’ll come away knowing not only how to create looks on yourself that suit you, but knowing why certain things just don’t work anymore. Lina is used to working with older women – she used eye-tape on me to shift creases out of the way to get a sharper line and that’s a trick well worth knowing all on its own. She’ll recommend a range of products – from Bourjois to NARS and Chanel – so it’s appropriate for a variety of budgets.

Is there one product that every woman should have? “Yes!” says Lina. “Two actually – NARS Blush in Lovejoy (£22.50 HERE) and Bourjois Healthy Mix Serum Gel Foundation (£11.99 HERE).” Bourjois Healthy Mix is already a favourite of mine for giving skin a beautiful glow, but NARS, I’m on my way!

If you’d like to find out more about beauty coaching, then do contact Lina at information@linacameron.com or see her site at www.linacameron.com.

Home › Article › Do You Need A Beauty Coach?