One of my favourite bloggers, Colin at www.colinsbeautypages.co.uk is a cosmetic scientist, and always manages to put an interesting slant on all his posts, whether it’s a skin care review or a science based find. He’s written here about make up in history, in particular Lapiz Lazuli.

Lapiz lazuli has been mined in Afghanistan for about 6000 years. For most of that time it has been the only source, but early in the twentieth century another deposit was found in Siberia, and since then a few other locations have been found and exploited.  Despite this there still isn’t that much of it around.  Its rarity made it fabulously expensive. In most of history it has been more expensive than gold and is not far behind it even today.  It was well known in the ancient world as gem stone in its own right, ground up to produce a pigment for paint or used as an ingredient in make up. By the time Cleopatra was using it in her eye shadow, it was already a practice that had gone on for thousands of years.

Like a lot of good things, trade in lapis lazuli into Europe dried up when the Roman Empire fell.  But come the Renaissance, the world began to get back to business and the vivid blue colour again became available.  Its use revolutionised the colours available to the palettes of painters. 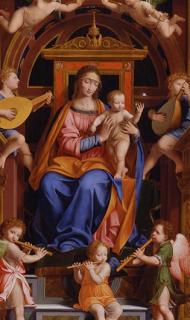 This work above, by Bernardino Luini, the Madonna and Child Enthroned with Angels, which was commissioned in 1523 takes full advantage of the contrast between the blue and the other colours to bring out the magic of the figure of Mary. Given the cost of the pigment it was often only used on high status individuals and significant religious figures like Mary in this one. By using blue for Mary’s cloak here Bernadino is saying ‘Mary is the mother of God and someone very important’ rather than ‘I really think blue is your colour’.

I don’t suppose that many women started going around in pure blue make up. It would have been a bit shocking and outrageously expensive. But I think that a dash of the vivid blue pigment can make a big difference to other colours.  I dare say there will be some make up artists reading this who can talk about that with a lot more authority than me.  But I do find the famous painting by Vermeer of a Girl with a Pearl Earring intriguing.   Have a look at her lips.

It is pretty clear that she is wearing lipstick.  You can even see where it is slightly smudged at the corner of her mouth nearest to us.  I can’t tell if that is deliberate or an accident.  And I find it easy to imagine that the vibrancy of the red and the distinct difference in colour between the lips and the surrounding skin might owe something to the presence of lapis lazuli.

In the nineteenth century ways were found to create a material with the same blue vibrancy as lapis lazuli artificially at a fraction of the price. The new pigment was called ultramarine blue and is still widely used today. Look out for CI 77007 on ingredient lists.  It will usually be listed as ultramarine blue as well to comply with US legislation. Even lapis lazuli still finds its way into some products. These will have lapis lazuli on the ingredient list.  The natural form is maybe a little duller than the synthetic one, but more interesting to the eye.

I tried to find some examples of products that use lapis lazuli with the help of a bit of googling.  I couldn’t find any but I am sure they exist, so I’d love to hear about any that anyone knows about.

There is a more detail about lapis lazuli on Colin’s Beauty Pages
http://colinsbeautypages.co.uk/lapiz-lazuli/