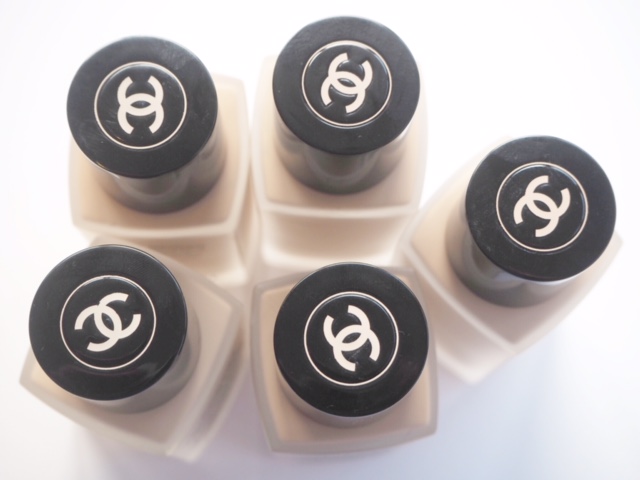 I’ve got to admit that it was instant love when I tried the forthcoming Chanel Les Beiges Healthy Glow Foundation. It’s exactly the right base for me because in my view it falls somewhere between a foundation and a BB. And I do love a BB. It’s a natural looking finish but with the extra weight of a foundation and despite having ‘glow’ in the title, it’s not a high sheen cover at all. The texture isn’t runny; more like a moisturiser texture than a traditional foundation texture.

On the skin, it feels barely there and despite having a polymer that resists sweat and sebum, my skin feels as though it’s ‘breathing’ properly. As you might imagine, the formula relies heavily on light refraction – in this case, titanium dioxide absorbs light rays to reflect their white components and transmit their red which in theory gives skin a rosy glow. I’ll have to put my hands up to say that if this is actually happening, it didn’t make that much of a difference – I did not look as though I’d just returned from a healthy walk through the woods!

However, I would say that Chanel Les Beiges Healthy Glow Foundation is a bit of a radiance maker. My skin looked fresh but not dewy. Of course, the formula has hyaluronic acid and plenty of it, so that’s always going to be a winner for my skin and despite the sebum/sweat control element, which can often make formulas run to dry, it is gorgeously comfortable. It also lasted all day. Above, from bottom to top in the swatch: 50, 30, 20 and 40 which all seem on the warm/beige side to me (I am 40 – it’s the perfect skin tone match). There are 14 shades, the darkest of which is No.121 (some of the deeper shades are not available in Asia) and the lightest is No.10, but I didn’t see either of these.

This shade is 32 and is a much pinker tone than my other samples, so it does seem at first sight as though there is something for everyone. It’s definitely an age-inclusive base – anyone can wear this, but as a general tip, I think you get better results from applying with a brush so you can really buff it into your skin.

I don’t have enough praise for Chanel Les Beiges Healthy Glow Foundation – it’s like trying on a dress that is the perfect fit and cut straight away. I don’t have a price yet for this, and I believe it’s launching at the end of January.