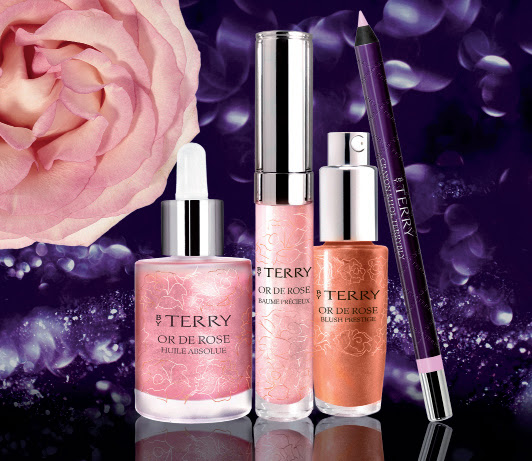 It’s a very elegant but small collection from By Terry this year, focussing on skin luminosity – and who doesn’t want a little bit of that!

There is definitely something rather special about Or de Rose Absolue because it’s got pretty much everything in it! The most special ingredient has to be 24 Carat Pink Gold microspheres to give luminosity and radiance as well as act as firming and renewing agents. For a lot of products, I would be discounting these claims (I’ve left out most of the claims from the release!) but By Terry is one of those brands that I do have a lot of faith in. It doesn’t mean I will believe everything, but it does mean that I believe it more than most! It’s also got plenty of rose extract and that is always lovely on the skin.

If you’ve never owned a By Terry gloss, then maybe this year is the one! I love them because they’re kind to lips. Containing active extracts of roses that stimulate collagen, I find them to be smoothing and flattering. There is also a smattering of pink gold in this as well.

In an amber-nude shade, this is the anywhere highlighter that gives a beautiful ‘lift’ to the complexion. Designed to give your winter skin a discrete sun-kissed look, it contains (again) pink gold, and pink, amber and copper reflectives.

This is the only product I’m really not sure about – a pink eyeliner. It’s a kinder substitute for white khol, but as it is meant to be applied inside the eye I can’t think how this will look in reality – nobody needs pinkeye. On the other hand, if it isn’t too pink, then I guess you might look wide-eye’d and awake which is always a bonus. Hmm, think I’m going to have to swatch this one!

The By Terry capsule collection launches into SpaceNk in November.