BritishBeautyBlogger/Marks & Spencer Beauty: Behind The Scenes 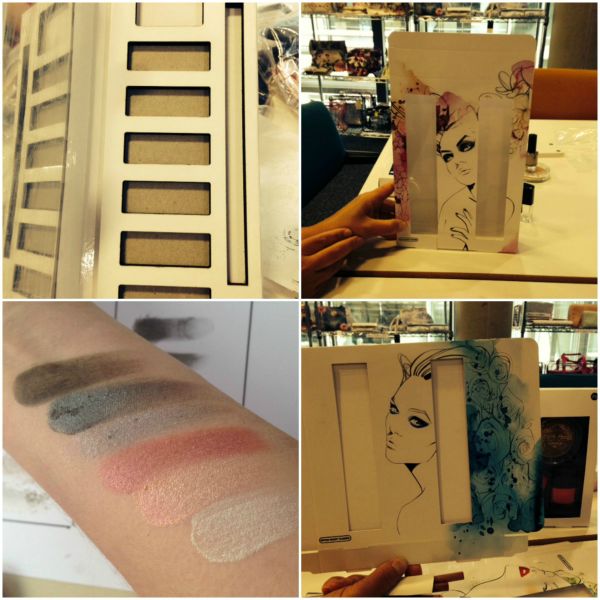 So, I need to go all the way back to September 2013 to get to where it all started. I’d had an idea for a limited edition beauty range that I thought tapped into all the M&S ideals – nostalgia, recognition and beautiful seasonal designs. I bumped into Louisa, the Marks & Spencer beauty buyer at an event so I told her about it – and she liked the idea.

I started sketching out design ideas, colour charts and mood boards and because my second idea was to use something based around my banner, designed by Nuno da Costa, it was crucial that Nuno was actually available to do the graphics.

After discovering that he was, and with a few preliminary sketches, I submitted colour selections. The preliminary ideas had to be approved at several levels, so it wasn’t until January this year that we got final approval for the go-ahead.

From then, it was all systems go! A lot of meetings at M&S HQ (I could get there in the dark now) with all sorts of factors that needed to be taken into consideration that I had no idea about. A good example of this is that M&S have a no-wastage policy on packaging, so you can’t send out a box with a big empty space in it. And packaging has to be a certain size otherwise it doesn’t fit on the shelves. So, you can end up in a bit of a circle ensuring that the product doesn’t waste precious packaging but you don’t want to stuff it full just for the sake of it. It’s a constant juggle between being (rightfully) environmentally conscious and creating something that looks good. At one of the meetings, there were at least ten people there, each from different departments that have a say in the production process, from PR to suppliers.

What’s crucial though, is that the range is geared to the M&S customer. Nuno had quite a job keeping both myself and Louisa happy, as we each had different audiences to gate keep for, but we did get there! It’s the first time that Marks & Spencer has done a beauty collaboration with a blogger, so the responsibility has lain heavy. I hope that this opens the doors for more blogger collaborations. It doesn’t matter that I have a press background – years of looking at and writing about beauty is a level playing field for bloggers: we’ve all got something to bring to the party.

Not only did I have complete control over colour selection, but also on things like product shape (as long as they fit in the box!). So, the palette and the nail varnish bottles were the first big packaging decisions I had to make, and in truth, I had to fight a little to get my own way on the polish bottles. But, that’s a key element of a collaboration – compromises have to be made – and on the whole, we did very well indeed in agreeing. I don’t think it’s reasonable to expect to agree on absolutely everything and I’ve put my trust in the fact that Louisa knows her customer inside and out and she’s also had to put her trust in me.

Once I’d locked down colours that I felt would really work, we met with the M&S suppliers to see if they could track down and supply the right colours. I submitted shades that I loved but wanted just a tiny different spin on, and they found matches from their own supplies for them. All the products are made to Marks & Spencer standard formulas.

One of the strange things is when you have colours locked into your head, and you end up looking at so many colours, you lose sight of what you wanted in the beginning! So, I kept photo records of absolutely everything and that was very helpful.

There was then a long wait for the colours to come back from the supplier – meanwhile, Nuno was working like crazy to get the designs done. Louisa supplied him with basic packaging shapes to work around, and he created the beautiful pictures you can see now. I wouldn’t necessarily have thought of flowers for the packaging, but the M&S customer loves flowers, so Nuno cleverly wove them in so that they cascade down the side of the boxes as hair. I knew I wanted a strong graphic with a pop of colour – on lips and eyes, for example – and it’s quite amazing really that we have both flowers and strong graphics! That’s truly collaborating.

I had been quite nervous about naming the products, for some reason, but as it was, I had no time for nerves at the actual point of naming because they had to be named in about half an hour flat! That’s how it works sometimes when you’re with a big company – some things take absolutely ages, and others happen very quickly indeed so you have to be prepared to go with the flow!

Other elements that we had to consider was whether I would do a launch. I felt that I’d rather use the budget we had to spend to specific individuals with some beautiful flowers and a hand written note – I know how hard it is to get out to launches, so I didn’t want to push time pressed people into something that was difficult to do.

After one final meeting, to approve the colours, there were literally only a couple of weeks to the Christmas In July event (which was in August!). We had one set of pre-samples to show at the launch. It was strange, let me tell you. People reacted in different ways – a couple of press weren’t at all sure how they felt about a blogger having a beauty range but time will tell whether they got over themselves or not! Mostly, the collection got a very positive reaction – most press were genuinely absolutely thrilled for me. Those who walked right past my collection were other bloggers. I am telling you, having your own range is not for the thin-skinned! There’s an awful lot to be learned by silence. I think blogger collaborations are still a point of controversy – it seems to cause conflicting emotions. Which is all the more brave and forward thinking of Louisa at M&S to take a chance on it because that was always a known factor.

After the Christmas launch, Janice, the M&S PR started sending out the products, and the range has begun to appear on blogs and soon to appear in print. Getting my own full set was absolutely a thrill – it took a while for me to settle with it. From something that had started a year ago, it was almost unbelievable that it was sitting in my kitchen. I looked at it without opening it for a whole day. I’ve subsequently played about with it so much that it’s nearly too tatty for pictures! I had to make two appearances at the Marks & Spencer conference on different days to talk to the store staff about the range – they’re the ones who are on the shop floor selling and advising on it, so it’s a crucial part of the launch.

I’m really looking forward to it going into stores tomorrow. But the thing I’m looking forward to the very most is sending a full set to my mum. She has absolutely no clue that this range even exists, so I think she will be completely shocked when she opens her package! She’s quite elderly now and doesn’t really understand how ‘messing about on the internet’ can be a real job. Hopefully, this is something concrete that makes what I do a little bit more real for her.

Meanwhile, beauty blogger collaborations are something that I really hope will continue. There’s a wealth of talent and beauty knowledge out there that deserves a worthy outlet – I’m always genuinely pleased to see a blogger collaboration. It’s a mark for all of us that we’ve changed everything.