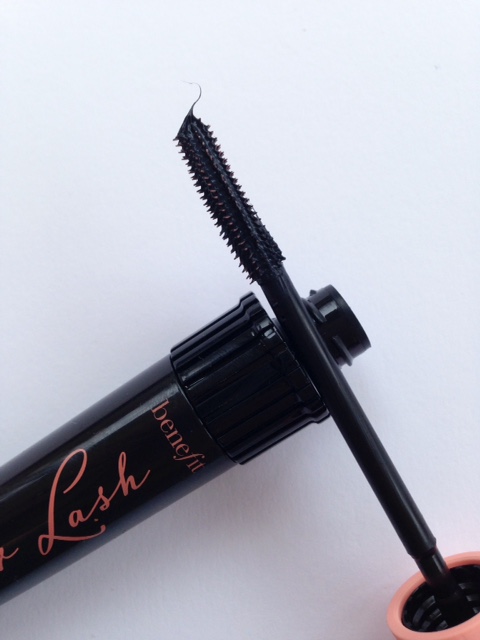 I’ve had lash extensions for years now (started off as a 6 month treat to self!) with Flutter, so the opportunity to test mascaras doesn’t come my way often. But circumstance and a missed appointment (my fault) meant that I had hardly any left at all and I thought it would be a good opportunity to give some mascaras a try. I often use mascara on my lower lashes but nothing gives the full effect of use like a stacked top row!

So, kicking off with the Benefit Roller Lash Review: this one is designed to give as much impact as They’re Real but with more of an uplift. The brush hooks the lashes and sends them upwards; the formula then sets them in place. As someone who hasn’t used mascara for a long time, this probably wasn’t the one to start with! I scared myself! Basically, you get a huge coating and super long lashes, but the effect was too much for me. I shouldn’t have put it on my bottom row as well, I think, because I got a big doll eye effect and frankly, it didn’t suit me at all! I’d forgotten all about the ‘crispy’ lash thing, too – well, while Benefit Roller Lash will send your lashes to the moon, the payback is that they do feel rather crispy. This launches in March for £19.50 – if you’re already a They’re Real fan, go for it – I think you’ll love the new version. If you like a more subtle effect, maybe not. Samples are around with the current issue of Elle Magazine.

This is my staple ‘bottom’ lash mascara – I prefer spiky, defined lashes and that’s definitely what you get here. It’s a tubing formula so literally does not budge from your lash until you remove with a warm, damp flannel. But again, it’s a very different thing once you go up top with it – while on the bottom row, it looks gorgeous and defining, on the top, it was just too spikey-making and again, crispy! However, if you want something that lasts the day and will not smudge or clump, the crunchy pay-back might be worth while. Its £12.95 HERE.

I had a Givenchy make-over at their House of Fraser counter yesterday (loved it which is unusual for me!) and so had the opportunity to try the new Phenomen’Eyes Mascara; a reinvention of the previous formula with more length, definition and curl. It certainly lived up to expectations – it’s the one, from the three, that I would choose as ‘my’ mascara going forward. In terms of crispiness, it outshone the others by leaving my lashes soft, but also spiky, very well defined and darkest black. My lashes just looked better with this than with the others.. more natural but as though I was blessed by the lash angel! I’m having my extensions put back in any minute now – literally – but I do know, which I didn’t before, that this is a very good alternative that I’d be very happy to use when I stop having them for good. It’s £23 HERE.