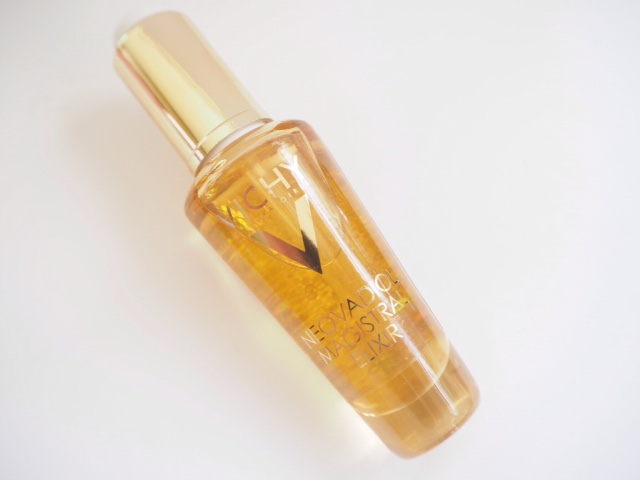 I always read releases about products for older skin with great interest to see whether they take the ‘fear’ or ‘fact’ angle. I’m pleased to say that Neovadiol Magistral Elixir takes the ‘fact’ road. The bottom line is that as you get older, your skin does change, particularly post menopause, with density loss (hormone related) which makes it look less plump. As anyone of Beauty+ age will know, plumpness is greatly helpful in keeping skin looking smoother.

According to the Vichy boffins, lipids are what Beauty+ skin types need to be chasing. Bearing in mind that lipids make up 40% of cell membranes and act as a cushion and water regulator, I’m inclined to agree. Unfairly, the body doesn’t naturally produce lipids; they’re normally found through fatty acids in food (diet plays such a strong role in how your skin behaves) and of course, via topical application.

Vichy call their combination of rice bran oil, shea butter and safflower seed oil ‘reconstructive’ oils, outclassing other oils such as argan or olive oil in terms of Omegas 9, 6 and 3. Texture wise, it’s rather a light oil, so your complexion won’t feel weighed down  – the scent is vaguely floral.

I’m always thrown a lot of stats and study results and am immediately suspicious of anything that says, for example, “99% of women said their skin felt younger” – because you can throw anything pretty much on your skin to make it feel softer and more bouncy, but it’s the look of skin that’s crucial in these claims. Neovadiol Magistral trials, after 2 months, have 86% of their participants saying that their skin looked denser and tighter. I find that impressive.

As far as the Neovadiol Magistral Elixir goes, you can use it on its own as a serum or add a few drops into your moisturiser at night to give it a boost up. The Elixir is £27.95 and the Magistral cream is £26, both HERE.