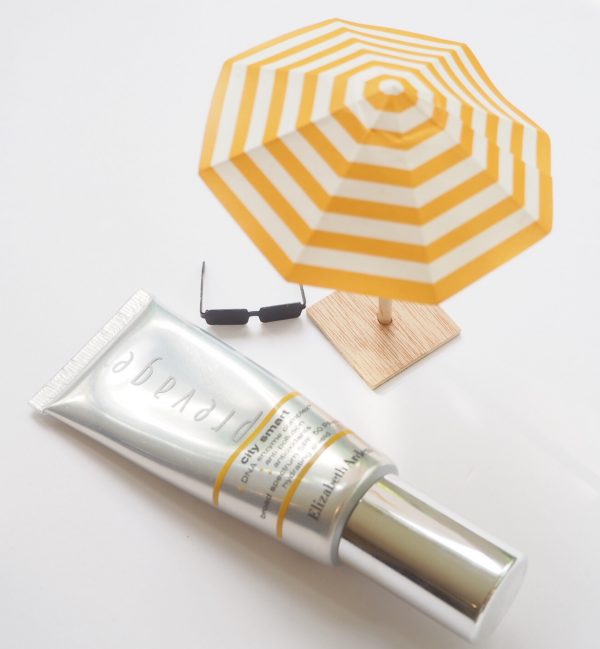 If you can cast your mind back not even a few years, the very idea of SPF50 on your face regularly was unthinkable. Those cloying, thick creams were just asking for breakouts and complexion that looked like it had been freshly dipped in oil.

Fast forward to today, and the SPF50 category of skin care is a whole new ball game and increasingly becoming part of our daily regime. Light texture is essential and sure enough, Elizabeth Arden Prevage City Smart SPF50 feels more like a light moisturiser than a sun protector. It’s very fluid and doesn’t leave oily residue on the complexion and crucially, hasn’t reacted with any of the foundations I’ve used over the top (you know those annoying squirls when one formula and another don’t get along – none of those) so it’s completely appropriate for daily use.

One of the key facts to know about City Smart is that it contains a patent pending anti-pollution complex powered by the best known anti-oxidants such as green tea and Idebenone. I’ve heard of this ingredient before because it’s one of the most powerful antioxidants in the world (if not the) and has been rather under-used in skincare til now.

City Smart also contains DNA Enzyme Complex which is a fancy way of saying that repair enzymes (from plankton, the thaliana plant, which incidentally has been thought of as a weed – bet it didn’t see this claim to fame coming – and ocean bacteria) protect the elastin and collagen matrix as well as strengthening it. All this is going on and yet, you’d never know by texture. What’s important, really, is that you feel confident that your skin is shielded from pollution, which is such a glow wrecker, and that you have the maximum possible UV protection with mineral filters, should you want or need it.

Combining high SPF with anti-pollution is definitely a forward trend – we’re seeing both flagged as trends already but not so much as a combined skin defence formula and this looks like a front-runner for very high levels of both things in one tube. Personally, it’s the physical things about Elizabeth Arden Prevage City Smart SPF50 that impress me (I can trust the scientists with the ingredient detail) because it’s such an easy wear. It comes out of the tube a slightly brown colour which doesn’t transfer to skin where it looks completely clear. I’m wearing it now and literally cannot tell it apart from a primer because my foundation is sitting so well on it. My skin feels well moisturised and totally comfortable.

Elizabeth Arden Prevage City Smart SPF50 is something to consider regardless of age or skin tone – rather handily, it has optical diffusers that give a slight blurring to the surface of the skin so if you’re not using any foundations or BB creams, you will still get a perfecting benefit. 40ml of this will last a good while because you don’t need to slather it on – it’s a different thing to holiday sunscreen so you treat it exactly as you would a primer. It’s already launched (HERE) and is £55.