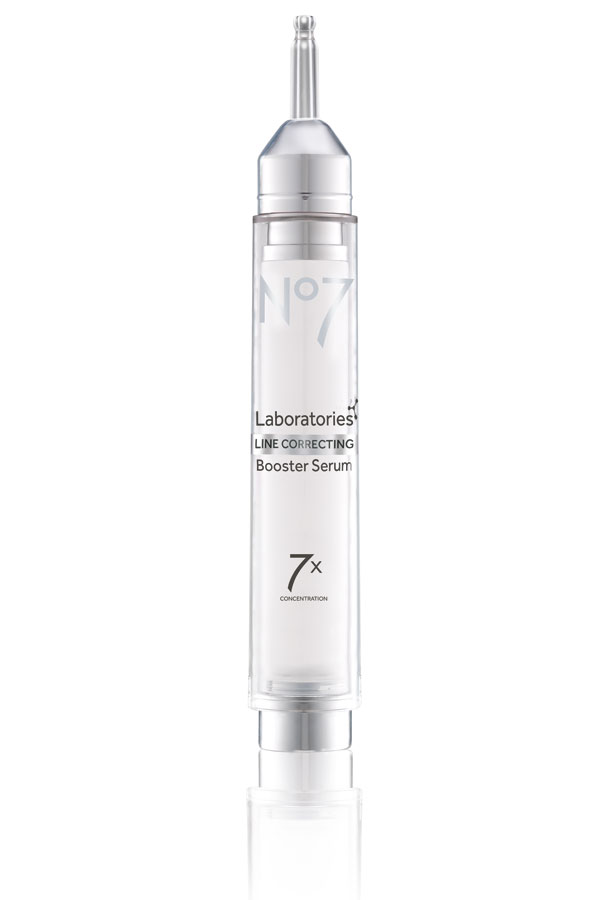 Oh, I have some problems with this! Boots are in such a prime position to really change the way that ageing skin and older women are perceived and yet, far from leading from the front with a fresh and positive attitude, they’ve chosen to go circa 1980 in their negativity towards women.

So, the new product (with a supposed 17K wait list and no proof offered of that) comes in an injectable shaped tube. That’s marketing at kindergarten level, designed to make you immediately think that the product may have some alliance with Botox. To be very clear from the get go, what serums and creams can do is in no way connected to what botulinum toxin injectables can do. They work in entirely different ways and it’s impossible for them to do the same thing.

The name, Line Correcting, is an immediate accusation that there’s something wrong with you. If you have lines and creasing on your face, there isn’t anything wrong with you. You might not want them and you might choose to be rid of them, but there’s nothing wrong and you perhaps shouldn’t feel duty bound to rush out and correct yourself. I mean, for whom do you need correcting? And, the fact that the packaging states “x 7” in reference to the Matrixyl strength is no accident – isn’t one of Olay’s key marketing points all about 7 benefits? If you’re an Olay fan or have every seen any Olay advertising that 7 is already in your head as an association with looking younger. It’s the same theory as supermarkets use when they flood the entrance with baking bread smells.. in the hopes you’ll be triggered to rush and buy more bread.

The main ingredient is Matrixyl 3000 Plus, the highest concentration of peptides ever used by Boots. It is clinically proven by several brands in many tests to show an impact on skin creasing so there’s no issue there. I believe that it can, and probably does, smooth out lines. However, Boots have chosen kindergarten marketing again to twist that claim into a ‘reduction of the appearance of wrinkles by up to five years’. Up. To. Five. Years. What does that even look like? *Up To* is spurious by any stretch of the imagination. There are all sorts of skin measuring devices (I’ve been to the Boots labs and been measured myself.. all I can remember is that I had a lot of bacteria on my face.. oops) and all brands looking for clinicals use them. But what do the lab numbers actually look like on a face. One year younger – how could you tell? What’s the difference between that and a week’s holiday in terms of visibility on your face? If you ask yourself what your lines looked like five years ago, could you remember with any accuracy?

The women who took part in the Boots trial for the product noted a reduction in lines and wrinkles around the forehead and eyes after a week. As anyone would if they started to moisturise properly. More results were seen after two weeks but there’s no measurement metric for this as far as I can see – and the language is very much about ‘improvement’ just in case you’ve forgotten that it’s your face that’s wrong and the cream is saving you.

One of the most disappointing things about the Line Correcting Serum campaign that’s now in full force is that nobody is questioning the underlying messaging – that older skin is something unpleasant, to be ‘cured’, to be made more acceptable, to be everything in fact, that it isn’t. As long as you’re unhappy with how you look, the beauty industry will keep getting richer: it pays to keep older women worried.

How you choose to age is up to you – we have all the choices after all and there isn’t a right way or a wrong way. Whatever makes you feel great is key and you shouldn’t feel any more bullied into not having Botox or whatever your feel like any more than you should feel pressured into feeling you have to look younger. What is very, very wrong, however, is that brands like Boots won’t support the notion that healthy, bright, clear, and glowing skin is beautiful regardless of age and regardless of whether there are any wrinkles on it or not. Beauty is not one thing, it’s many, many things and I hate the idea that this campaign is teasing our insecurities with clunky marketing that’s in many ways absolutely shameful.

Incidentally, as a behind the scenes moment, I tweeted something out about not liking Boots messaging to older women (well before this campaign) and was immediately contacted by the PR asking exactly what my issue was so she could feed back to her client. I’ve never heard from them since, so I think it’s safe to say that they’re not open to listening to any detractors.