Vichy In Shower After Sun 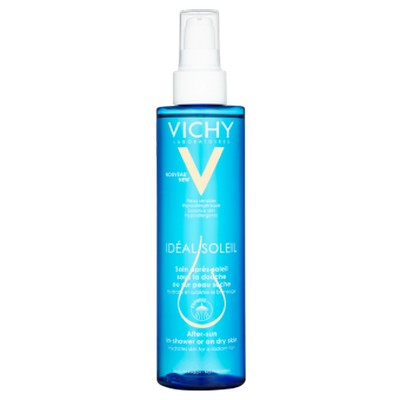 I’m sure that the in-shower concept has a way to go yet, but in-shower aftersun is one of the best ideas ever. I don’t see one that is specifically for children but memories of trying to put after sun on my own kids while they wiggled around determined not to have that happen to them makes me wonder why. Personally, I don’t often use after sun because I’m just not the sun baker I used to be and my sunscreen seems to keep my skin well hydrated enough, but I do know that it quickly becomes a chore rather than a pleasure.

Nivea led the way with this concept (I think the cucumber version is new and not yet launched in the UK but the original is HERE, £5) and I also notice that Boots Soltan has a similar version (HERE, £4). However, I do like the look of Vichy for its use of fatty acid rich oils such as shea oil, apricot kernel, blackcurrent seed, coriander seed and echium.

Contains shea oil and a variety of vegetable oils such as apricot kernel, coriander seed , blackcurrant seed and echium which are all rich in fatty acids. Unsurprisingly, Vichy In Shower After Sun is the most expensive in-shower after sun that we have access to in the UK, and I haven’t tried it yet, so can’t say whether the 48 hour hydration promise delivers, but it seems to be a more luxurious way to get rid of that slippy limb fandango that we all end up doing after a day in the sun. It’s £13, currently on offer for £9.75 HERE.