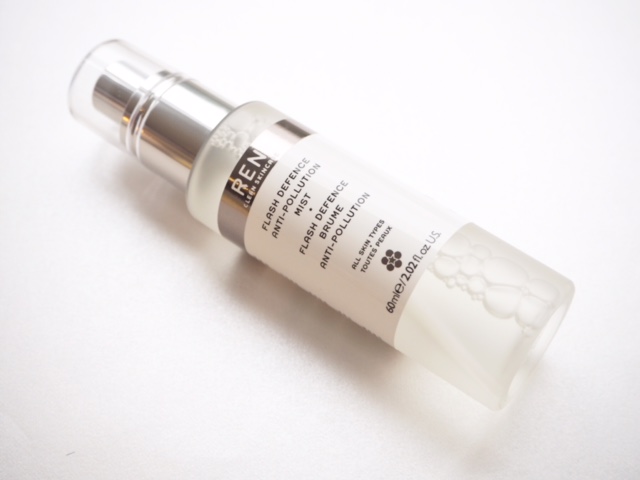 With ‘anti-pollution’ the next big thing in skin care, REN has got in early with their Flash Defense Anti-Pollution mist, designed to protect the skin from free radicals and strengthen it against oxidative stress. The weird thing is that I was having a conversation with a friend this morning about the fact that she has a sore eye, the cause of which doctors have put down to pollution (she is a London city guide). Pollution will affect your skin depending upon where you live – I don’t feel convinced that someone living in the wilds of Scotland, for example, needs this product, but someone like my friend Carolyn probably does – if pollution can affect her eye tissue then it’s highly likely that it’s going to also affect skin.

If you don’t live in a big city, then that ‘grey’ cast that those of us who do often wear will be a bit of mystery (London is not called the city of black bogies for nothing!) and REN Flash Defence Anti-Pollution Mist claims to neutralize urban grey and for that alone, I want to dip my head in a bucket of this!

Ingredient wise, it’s Biosaccharide Gum (derived from sugar and yeast) to shield against major pollutants, Zinc and Manganese Amino acids to protect against oxidative stress, Quercetin to boost antioxidant capacity of the skin and Alfa-glucan to detoxify and increase cell longevity.

The formula is a transparent mist that feels like a refreshing water on the skin and lightly scented (I can’t really tell what it is .. something aromatherapy-ish). If you’re a kind of ‘belt and braces’ person when it comes to skin, I think REN Flash Defence Anti-Pollution Mist is one of those products I’d rather have, than not. But how you actually tell if it’s working, other than the reported brighter skin, I honestly don’t know – I think you just have to believe. Or not.

REN Flash Defence Anti-Pollution Mist is £24. It’s launching at SpaceNK this month so keep a look out.