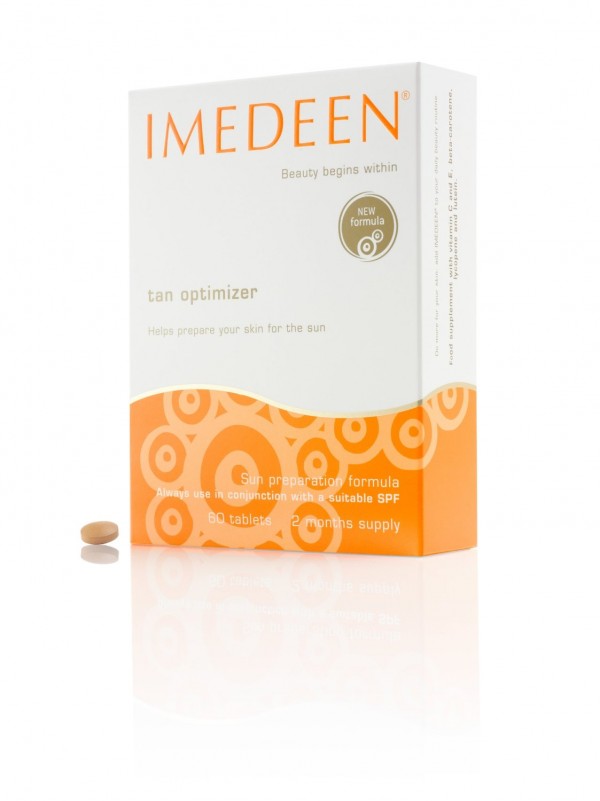 Over the past few days, so many people I’ve met are talking about Imedeen Tan Optimizer; in fact one person said she wished she’d never told her friends about it because she can never find it in stock anywhere. And, that’s true. Last summer, it was hard to get hold of, and I’ve just done a quick check at Boots online and they don’t have any… so it looks light there might be an optimizer shortage again!

I love these tablets – I take Imedeen anyway, but if I’m going away on a quick break then I always take the Imedeen Tan Optimizer a couple of weeks beforehand. It’s called a ‘sun preparation formula’ so the theory is that the ingredients (antioxidant Vitamins C and E, carotenoids, lutein, lycopene and beta carotene) will protect your skin from free radicals while in the sun, while ensuring your skin can help to protect itself. I’ve read mixed reviews on whether they turn you browner, but from my own personal experience, I find I can get a light/medium tan (which is all I want) in literally a couple of days, without spending hours baking in the sun (which I don’t want to do – those days are over). What’s very noticable is that as long as you keep taking the tabs, the tan lasts and lasts far longer than it normally would. They’re perfect for time poor tanners like me who can only get a few days at a time anywhere in the sun.

Tanning is such a tricky issue – we all know we shouldn’t but most of us can’t quite kick the habit although I think maybe those mahogany days are gone. It’s making sense to me to be able to get a golden glow while spending less time in the sun and the longevity of the tan afterwards means you’re not diving back into the sun at any given opportunity. I must flag up that Imedeen Tan Optimizer isn’t sun protection as such so you will absolutely need your usual SPF and that these are my personal opinions from using the product. Tanning isn’t for everyone these days.

I met someone yesterday who administers her own tanning injections (they’re not even legal in the UK to my knowledge) because she can’t bear the thought of being pale all through summer – I’ve suggested she try Imedeen Tan Optimizer instead – it’s certainly going to be a much safer option than injections bought over the internet (I’m cringeing as I write that – I was genuinely shocked!). So, I’ll be taking them through the summer, so I might give some updates – I’ve also realised that for the break I’ve just been on I took two tablets daily when it’s only supposed to be one!

I’d suggest that if you want to try Imedeen Tan Optimizer over the summer or you’re heading off on holiday, you get them as soon as.. I’m predicting a sell out. I’ve found them HERE for £40 for two month’s supply, but Boots occasionally do Imedeen offers, so if you can hold your nerve, it might be worth waiting. I have seen them more cheaply on Amazon, but when it comes to something like this, personally, I wouldn’t risk it – it’s impossible to know if they’re genuine or even how old they are.