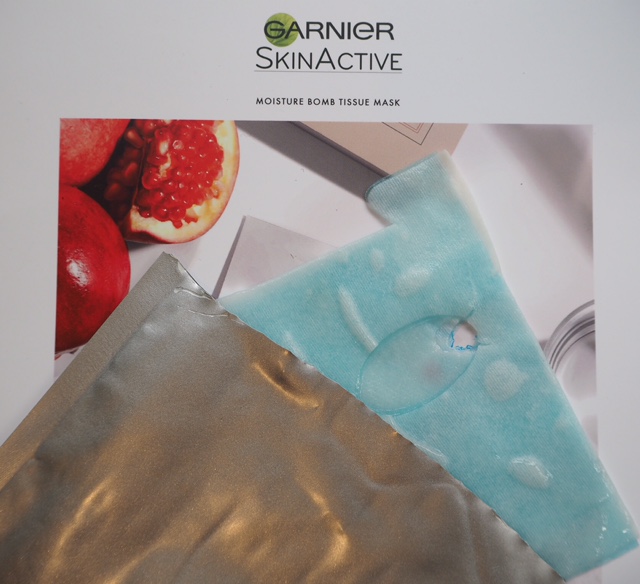 Honestly, there is no stopping the mask train. My (sold out) Origins Box didn’t include any sheet masks – I’m not a big fan of them to be honest because I find them sloppy and awkward (and always COLD on the face!) but more than that, I never feel terribly moisturised from them. I don’t know if it’s that the formula is such that it’s almost all water, but I get a slightly dry feeling from them when it’s supposed to be the opposite.

I’ve had a lot more luck from the Garnier Skinactive Moisture Bomb Tissue Mask – it really did leave my skin feeling very moisturised indeed. I won’t lie – when you take the tissue mask away and leave just the wet product, after you’ve rubbed it in it does initially feel a bit sticky. That feeling does wear off to leave soft and hydrated feeling skin. Now, what Garnier says is that you get one week’s worth of hydrating serum in 15 minutes. I’m sure they’re not allowed to claim it unless there is some truth to it, but I don’t think it’s a measurable that I can make any sense of. It also claims 24 hour moisturisation which certainly was the case – and my complexion really did feel as though it had a good dose of serum – so it’s a ten out of ten on that. Better still, you can get two goes out of it because it’s very saturated – just lock it up in a ziplock and pop in the fridge.

I’ve seen sheet masks reach the giddy heights of over £16 each.. so at £1.49 (HERE), the Garnier Skinactive Moisture Bomb Tissue Mask is worth every single penny. If you hate sheets, I think this one might change your mind and I’d particularly recommend it for dry, post sun skin.