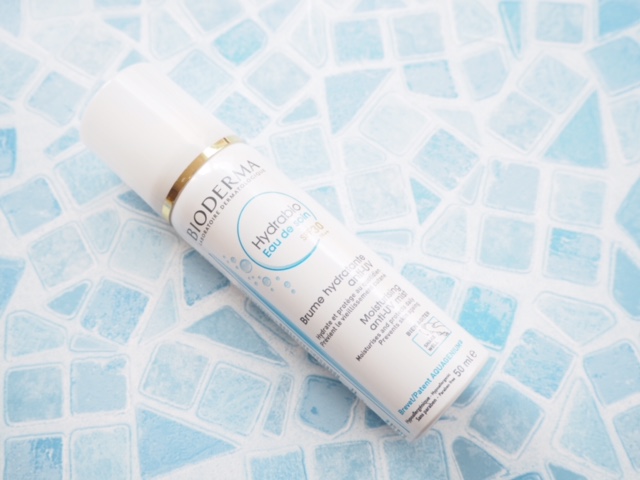 I first posted about Bioderma Hydrabio Eau de Soin SPF30 back in September because I managed to pick up a can in a pharmacy in Paris. It’s been available in France for some time now, but has just launched in the UK. I’m not quite sure how I missed the fact that it’s now available since I’ve been waiting since September, but thankfully, a reader has pointed it out. In light of the enthusiasm over the similar L’Oreal environmental water (destined currently for Asia only), I thought it’s worth flagging up again.

So, to quickly recap, this is a moisturising anti-UV mist – it’s very fine mist that you use as an incidental sun or environment spray (not for sunbathing) to protect your skin from pollution, so very handy if you work or live in the city. It’s 50ml and very light so easy to carry in your handbag and you can use it over your makeup or on bare skin (anywhere on the body, including the face). Given that anti-pollution and protecting mists are such a strong forthcoming trend, this is an early example of things to come. Bearing in mind that Bioderma is the same family as Institut Esthederm (which is my favourite sun care) that also has the ability to encourage skin to protect itself, and I’ve been so impressed with that range, this is a winner for me. In use, it feels like water on the skin with just a hint of oil when massaged in (no need to massage, but I did to test for texture) and it’s certainly less oily in feel than the L’Oreal version. After a few moments the emolient feel disappears and your skin feels exactly as it was. I don’t think it’s moisturising particularly, although it claims to encourage skin to continously hydrate itself, but neither is it dehydrating. All in all, to get an SPF30 into a product that feels like water is pretty incredible. Do remember to shake it up before using.

I’ve tracked it down to HERE for £9 but it’s free postage on anything over £15 so you might like to double up with a friend.