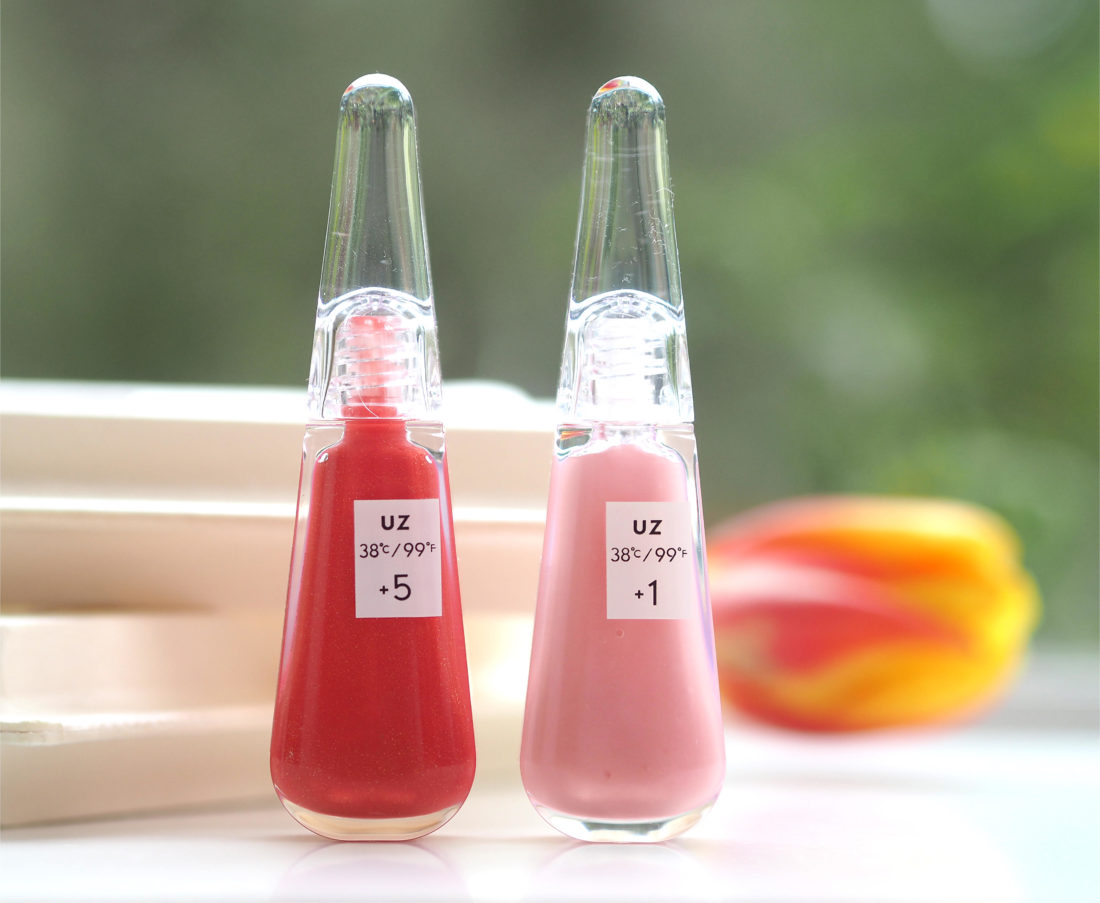 [unpaid/sample] There’s a slightly complicated story behind Japanese brand, UZ. Originally called Flowfushi, a complete rebrand occurred in 2019 with the previous collection of eye liners disappearing and then reappearing under the name UZ by Flowfushi. Their liquid liners, subsequently known as Moteliner, are now Eye Opening Liners.

While the liners form the backbone of the brand, my eyes lit up when I spotted the Lip Treatments. I might be useless with a liquid liner but I can find my way around a lip gloss no bother at all :-). Officially, they’re called 38°/99F° Lip Treatments containing Multi Flora – a microbe mix with lactic acid bacteria that keeps lips soft and non-peely. There are five shades and what looks like occasional limited edition.

I think what really sets this brand apart from other liquid liners is their 7 shades of black. If you like a black liquid liner, UZ offers up Pitch Black, Matte Black, Metallic Black, Platinum Black, Red Black, Navy Black and Green Black. I would love to get my hands on Red Black!

The liners sit easily in the hands – they’re an octagonal shape so grip isn’t difficult – they remind me of drawing pencils. There are an additional 12 shades that aren’t part of the black line up.

The brushes are nicely firm – they have give but seem to be at exactly the right tension, if that’s the right word, to have both give and resistance to form a neat line. As with many Japanese make up products, they’re built to withstand humidity with a water resistant film.

Shades are Light Blue, Navy and Black, with the Lip Treatments in +5 Orange and +1 Sheer Pink. As you can see, the orange has a bit of heat to it with some golden flecks and the pink has an iridescence. It’s such an easy, milky wear and on the lip, has a gloss feel rather than a balm feel. Packaging uses the minimum of materials made from recycled paper, plastic and steel. So, the big question, where to get it? I feel certain they’re about to launch in the UK but you’ll need to be either in Japan or stateside HERE to get hold of them for now. I’ll update as soon as I can on this – there is availability on sites like YesStyle but the eye liners should be around £12 each and they’re way more expensive than that. All I can say is that I’m looking forward to this brand having more exposure here – it’s beautiful, thoughtful and covetable.